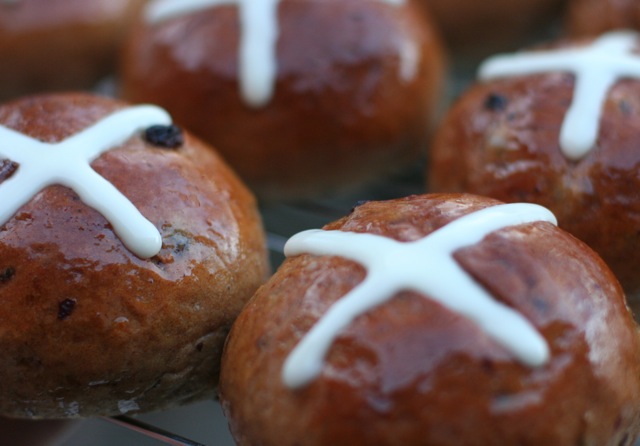 A reader emailed me asking if I had a hot cross buns recipe. I didn't, but I thought that sounded like a great idea for the upcoming Easter holiday. My go-to guy is Peter Reinhart, but his recipe was basically a spiced panettone, which sounded delish but also like way too much work (what with it being leavened by wild yeast instead of commercial). This recipe uses some cooked sweet potato to enrich the dough, much like my sweet potato challah. I used citrus zest instead of candied peel (because I hate it), and it provided the perfect balance to the spiciness of the dough. The buns are chewy and moist, substantial but not dense.


METHOD
1. Place soy milk, sweet potato, sugar, yeast, orange juice, and oil in a blender and blend until smooth.
2. In a separate bowl mix flour, spices, and salt. Add mixture from blender, and zests and bring into a dough, adding more liquid or flour as needed. The dough should be firm but still tacky. Knead on a lightly floured surface (or in a stand mixer) for 5-8 mins, until smooth, kneading in the currants or raisins right at the end.
3. Place in an oiled bowl, turning dough to coat, cover, and let rise until doubled (1 to 1.5 hours).
4. Line a backing sheet with parchment paper. Divide the dough into 12 equal pieces (about 100g each), and shape into a ball. Place on prepared sheet and press down to flatten. Mist with oil, cover, and let rise until about doubled (30-45 mins). Preheat oven to 400.
5. Before baking, uncover and cut a shallow cross into the top of each bun with a razor blade or sharp knife. Brush with soy milk and bake for 15-17 mins, until a deep golden brown.
6. While buns are baking, bring glaze ingredients to bubbling over medium heat in a small saucepan. When buns come out of the oven, brush with glaze. Let sit for 1 min, then brush with glaze again. Let cool on a wire rack. The glaze is optional. It adds some sweetness, but also helps keep the buns fresh by sealing them off from the air.
7. When buns are cooling, mix together icing ingredients (it should be stiff but not too stiff) and fill in the cross shapes with a piping bag. The corn syrup is optional, but does help the icing retain its shape. Pipe on crosses while the buns are still a little warm to the touch.

NOTE: If you want to bake these buns up fresh on Easter day, the dough will keep in the fridge (I had my dough in the fridge for 24 hours). So, make the dough, place in a greased bowl, cover, and place in the fridge overnight to rise. On baking day, remove the dough from the fridge, cut into 12 pieces, and shape into buns while still cold (it's a bit harder to do cold). Mist with oil, cover, and let rise in a warm place until almost doubled (this will take about 1.5 hours). Score and bake per the recipe above. The end result is more tender and a little more complex in flavour.
Posted by Vegan Dad at 6:53 AM