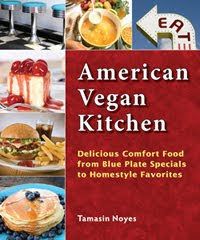 I was really pleased when Tamasin Noyes contacted me to review her cookbook, American Vegan Kitchen, because I had been eying it on Amazon. I dig comfort food, and this book is expressly dedicated to all things homey and comforting. From donut bites to potato skins to burgers and onion rings to apple crisp, this book has you covered from breakfast to dessert. The book begins with a brief intro to the basics (what is tempeh?) and a few recipes for seitan, veggie broth, spice blend, etc. What follows is almost 200 pages of breakfast food, starters, soups, salads, sandwiches, entrees, sides, and desserts. Most recipes get their own page (shorter recipes share a page with other shorter recipes) which makes them very cook-friendly (I hate having to flip back and forth between the ingredient list and method). The book is published by Vegan Heritage Press, which, from what I can tell, is a small company that only publishes vegan books. The front cover is great, but I wish the photos in the colour insert were of the same quality. The layout is a touch spartan, but easy to read and follow.

As to be expected with a cookbook of veganized American cooking, the entrees and sandwiches are heavy on the seitan and tempeh which stand in place of meat. That being said, the book is not simply a fake-meat fest. Flip through the table of contents on Amazon to see what I mean. Some recipes are there in their full deep fried glory (which you will either love or hate), while others have a baked option (the onion rings, for example). I will be honest, I don't really cook from cookbooks on a regular basis, but I can see turning to this book to supplement Sunday brunches and neighbourhood BBQs.

After leafing through the recipes, I decided on the Tuna-Free Noodle Casserole. It was a total hit with the whole family: a creamy cashew-based sauce with roasted chickpeas and a crumb topping. The ingredient list is one of the longest in the whole book, but the kids loved it so it was worth the work. As you can see, I can't get egg-free ribbon noodles here, so I used bowties. 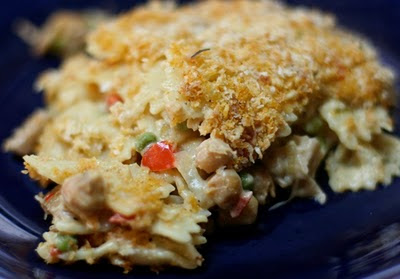 Email ThisBlogThis!Share to TwitterShare to FacebookShare to Pinterest
Labels: cookbooks
Newer Post Older Post Home
All images and recipes (unless otherwise noted) are property of Vegan Dad. Please do not re-post or otherwise duplicate without permission.