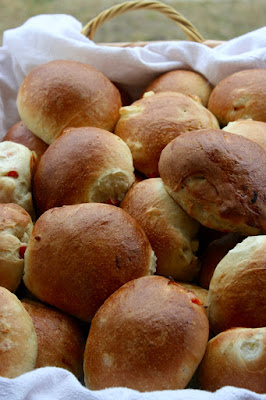 What?! A new post?! As I explained on ye olde Vegan Dad Facebook page, I have been battling Crohn's this entire year and that has very much dampened my enthusiasm for cooking and eating. I think I am finally getting it under control, so here's hoping! I have also spent the last three weeks on strike which was the inspiration for these buns. On the picket line we have been blessed by endless treats from supporters. I thought it would be nice to have a handheld savoury snack instead and these fit the bill. They are reminiscent of stuffing, hence the name. You could easily add some cranberries in with the apple, or raisins. Use this as a starting point and go nuts (maybe even add nuts?). Could be great for Thanksgiving or Christmas dinner.

METHOD
1. Make the dough per the recipe link above. While the starter is rising, preheat the oven to 400 degrees.
2. Toss the diced potato and carrot in a splash or two of olive oil and season lightly with sea salt. Transfer to a cookie sheet lined with baking parchment and bake for 20 mins, turning the veggies after ten to ensure and even roast.
3. Wrap the unpeeled garlic cloves in a piece of aluminum foil and roast along with the veggies for 20 mins.
4. Set veggies and garlic aside to cool.
5. Heat a splash of olive oil in a small frying pan over med-lo heat and saute leeks until softened (about 5-7 mins). Add apple and cook for a minute more. Skin and chop up roasted garlic and mix through. Remove from heat.
6. Continue making the dough but add the herbs in to the dry ingredients. Add the veggies and diced apple/leek mixture in during the final two minutes of kneading. I like to start this in the stand mixer with the dough hook, but finish on a lightly floured counter to make sure nothing gets too smushed up. Add more flour is the dough is too wet. It should be slightly tacky but not sticky.
7. Transfer dough to a oiled bowl and let rise for an hour, or until doubled.
8. Line a large cookie sheet with parchment paper (or two smaller trays). Divide dough into 24 equal pieces and shape into rolls (a little tricky with all the veggies and apple, but be patient). Place on tray (in six rows of four), mist with oil, and cover with plastic wrap to let rise.
9. Preheat oven to 400 degrees.
10. When rolls have almost doubled and are touching one another, brush tops with plain soy milk and bake for 15 minutes, rotating tray half way through for an even bake. Cool but enjoy while still warm.

Email ThisBlogThis!Share to TwitterShare to FacebookShare to Pinterest
Labels: baking, holiday
Newer Posts Older Posts Home
Subscribe to: Posts (Atom)
All images and recipes (unless otherwise noted) are property of Vegan Dad. Please do not re-post or otherwise duplicate without permission.