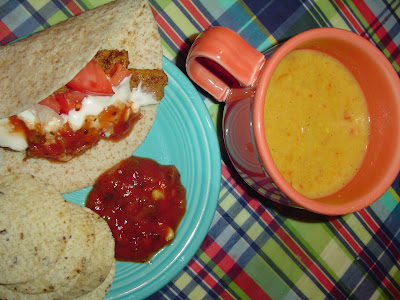 Prep Time: 50 mins
We bought some 99 cent tortillas (a mistake, quite frankly) last week at the store, so tonight I went for soft tacos accompanied by chips and salsa and the corn chowder from Vegan With a Vengeance. It is the perfect addition to any Mexican meal because it has jalapenos and lime juice in it, and has a creamy taste and hearty texture.
For the soft tacos:
1. Fry up strips of seitan in a few tbsp. oil a cast iron skillet on med-hi until browned. Stir frequently to keep from sticking.
2. Stir in 1/2 tsp. each of chili powder, cumin, oregano, and cinnamon.
3. Squeeze juice of one lime over the seitan and stir. This will help deglaze the pan. It should look something like this: 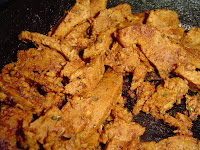 4. Serve from the skillet into warmed tortillas with chopped tomatoes, onions, lettuce, vegan sour cream, etc. (we only had tomoatoes and onion around tonight, alas).
I also made this vegan sour cream recipe. Not too bad, actually. Not as good as Tofutti, but far cheaper and really easy to make.
VERDICT:
Son # 1: I hate corn soup!
Son #2: Me too!
Son # 3: (too young to talk and who eats anything) Goo ga!
(Not that it mattered since they have to clean their plates to get a bedtime snack)
BUT, the tacos were a big hit (though they eyed the whole wheat tortillas with caution).
Posted by Vegan Dad at 6:39 PM

Email ThisBlogThis!Share to TwitterShare to FacebookShare to Pinterest
Labels: Mexican, seitan, tacos, Vegan With a Vengeance
Newer Post Older Post Home
All images and recipes (unless otherwise noted) are property of Vegan Dad. Please do not re-post or otherwise duplicate without permission.