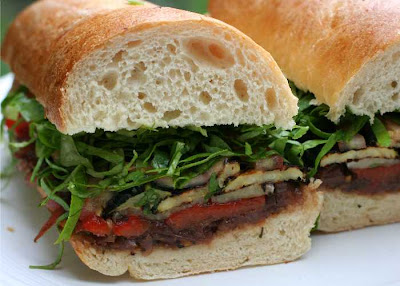 I decided to make some submarine buns today (or hoagie rolls, whatever you want to call them) but wanted to steer away from the rather obvious seitan route when filling them. Instead I went with a "bruschetta meets grilled veggies" route for a different spin on an Italian sub. If you have leftover sandwiches, wrap them up tightly in waxed paper and refrigerate--the flavours will meld together and the veggies really do taste great cold. Perfect for lunch at work.

METHOD
1. Heat oil in a saucepan over medium heat. Saute onions and garlic for 5-7 mins until softened. Add vinegar and tomatoes and stor well. Cook until liquid has cooked off. Season with basil and salt and pepper. Set aside.
2. While tomato mixture is cooking, toss eggplant and zucchini in some olive oil and season with salt and pepper. Grill on a BBQ over medium heat until soft, turning regularly. Roast the pepper at the same time. Skin, seed, and slice when done.
3. Toss mushrooms in olive oil and season with salt and pepper. BBQ cap side down until water has been released. Remove from grill, thickly slice, and mix with smoked paprika.
4. Assemble sandwiches. Spread a thick layer of the tomato mixture on the bottom bun. Top with red pepper, then eggplant, then zucchini, then mushrooms. Top that with tomato slices and lettuce. Top with bun and enjoy!

ON SUBMARINE BUNS
The buns are Peter Reinhart's Italian bread recipe (p. 172). I subbed the biga with 180z of sourdough starter, then reduced the liquid by about 2 tbsp (add slowly until dough forms). I brushed the final buns with soy milk and baked for 15 mins at 450 degrees.

Email ThisBlogThis!Share to TwitterShare to FacebookShare to Pinterest
Labels: eggplant, Italian, mushrooms, peppers, zucchini
Newer Post Older Post Home
All images and recipes (unless otherwise noted) are property of Vegan Dad. Please do not re-post or otherwise duplicate without permission.