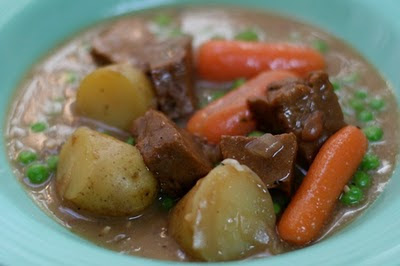 Here is the stew I made for St. Patrick's Day. I have made Irish Stew before but this time I found a secret ingredient that made it even more awesome: Montreal Steak Spice. The pepper adds some kick while the coriander and paprika make for an earthy and hearty tasting stew. I did not have any seitan on hand, so I made "beef" by adapting the vegan sausage recipe and was thus able to whip up a tasty stew fairly quickly. As while most stews, feel free to improvise as you see fit. Here is what I did.

INGREDIENTS
Seitan
- this recipe, made with 1 1/2 cups of wheat gluten, no fennel, and 1 tbsp Montreal steak spice. I also added 1/2 tsp of gravy browner to get the dark brown colour. I then shaped it into a square, wrapped it in foil, and steamed it for 45 mins. I used half of the seitan (and froze the rest), cut it into small cubes and simmered it in the stew for about 30 mins. The end result was pretty good. Not too tough or bouncy.

Stew
- basically this recipe, but I did not use the vinegar or red wine. Instead I used veggie broth and added 2 tbsp Montreal steak spice. A reader commented that this was WAY too much steak spice, so maybe mine is old and less potent. Just add to taste.
Posted by Vegan Dad at 8:37 PM

Email ThisBlogThis!Share to TwitterShare to FacebookShare to Pinterest
Labels: carrots, potato, seitan
Newer Post Older Post Home
All images and recipes (unless otherwise noted) are property of Vegan Dad. Please do not re-post or otherwise duplicate without permission.