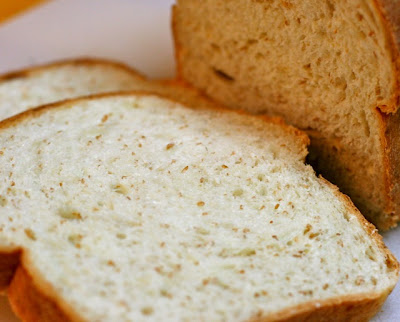 Yes, another bread post. I have been doing a lot of baking lately and not a lot of cooking. Well, I have been cooking, but nothing of particular interest due to all my time being consumed by grading. Now that all the papers have been marked (huzzah!) I can get back into the kitchen. Reinhart describes this bread as "a poor compromise for whole-grain purists" but still a "tasty, soft" loaf. Mine rose like crazy and made for a perfect PB and J sandwich the next day.

GENERAL NOTES
1. This is one of the few breads in this book that can be made in one day, which is a real plus.
2. The recipe only makes one loaf, though it is a 2 lb loaf. I dislike recipes that only make one loaf because it seems like a lot of time to spend on bread that will be gone the next day. But, I suppose I could just double it.
3. I used Robin Hood "Best for Bread" whole wheat flour. I think all purpose would have sufficed since it is only 1.5 cups. The Robin Hood is the best bread flour I have been able to get around here. I tried some organic whole wheat bread flour from the local co-op, but it was more like a bag of bran with so little gluten my bread did not rise much at all. Bummer, man.

VEGAN NOTES
1. I subbed soy milk powder for the powdered milk, but I think I could have just left it out.
2. The recipe calls for sugar or honey, but I used maple syrup.
Posted by Vegan Dad at 9:11 PM