Baking Bread on the BBQ 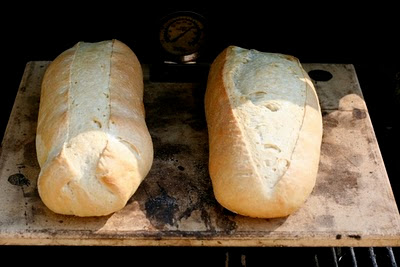 I know this will amuse my southern readers, but it is really hot here. By hot I mean 32 degrees celsius (90 F) and humid. We have no air conditioning, so it got pretty stuffy and hot inside. By keeping the windows shut we were able to keep the house at a balmy 26 degrees. That meant bread baking was out of the question even though we were down to our last slice. Then I thought, why can't I just bake it on the BBQ? Why not, indeed. It worked splendidly.

First, I removed the grill and placed a cast iron pan underneath for steam. 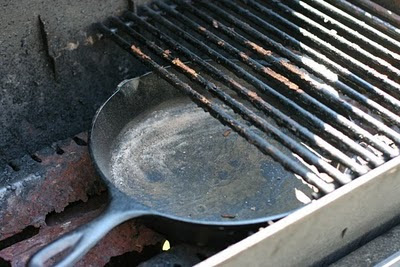 I then replaced the grill and put a clay dish on top to raise the baking stone off the grill a bit. This way the stone does not get too hot and burns the bottom of the bread before the loaf is done. You could also use metal cans or something else fireproof. Just make sure not to raise the stone too much--you need room for the bread to rise. 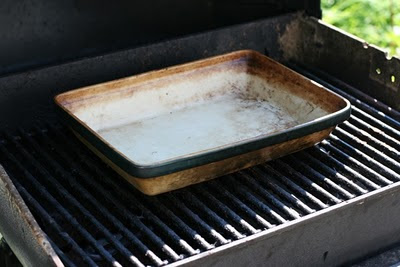 On top of the dish went the baking stone and a thermometer to get an accurate idea of the temp. 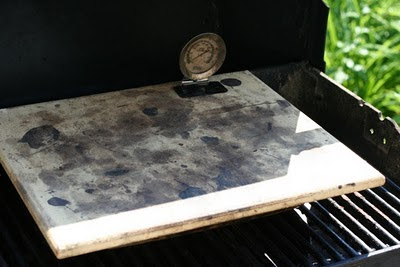 I made Reinhart's Italian Bread recipe then preheated the BBQ for about 15 mins to get the stone hot and to make sure I had a consistent temp around 450 degrees. I put the loaves on the stone and poured a cup of hot water into the pan below. I did not bother with spritzing the inside with water 3 times as I do with oven baking since I figured I would lose too much heat. Instead, I baked at 450 for 10 mins, rotated the loaves, then baked for another 12(ish). I kept an eye on the temp but tried not to fiddle too much (or lift the lid too much). The end result was perfect.
Posted by Vegan Dad at 10:22 PM