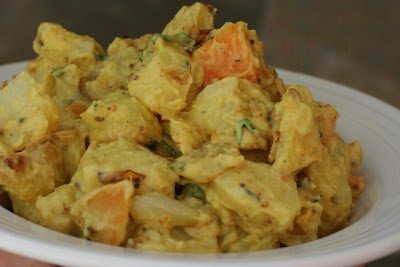 I love potatoes and I love potato salad. Usually I go for a more traditional American salad with sweet pickles and plenty of mayo--perfect for summer. I also don't like too many crunchy bits in my salad (ixnae on the elerycae), a rule that I broke for this Indian inspired dish that is awesome warm or cold. This recipe also cuts back on the mayo by thinning it out with soy milk for a moist but not too runny potato salad.

METHOD
1. Get some salted water boiling and cook the potatoes. Since sweet potatoes cook faster than white, ad then in about 10 mins before the white potatoes are done cooking (they take 20-25 mins, usually).
2. While potatoes are cooking, heat oil over med-hi in a large frying pan. Add onions and saute for a few mins, letting the outsides get nice and brown. Keep stirring so they don't burn. Add garlic, ginger, and chile and mix well. Add mustard seeds and cook a few mins more (seeds should begin to pop). Add spices and mix well. Remove from heat.
3. Drain cooked potatoes and let cool until warm but not hot. Cut into cubes. Mix mayo into the onion mixture, then toss with the potatoes. Thin as needed with soy milk so potatoes are coated. Mix in cilantro, and season to taste.
Posted by Vegan Dad at 8:48 PM

Email ThisBlogThis!Share to TwitterShare to FacebookShare to Pinterest
Labels: Indian, potato, sweet potato
Newer Post Older Post Home
All images and recipes (unless otherwise noted) are property of Vegan Dad. Please do not re-post or otherwise duplicate without permission.