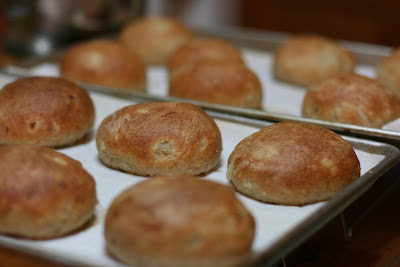 I know its been four months since my last post on this book, but I still intend to get through it. I've just started refreshing my sourdough starter again (after some neglect) so I can finish off the final recipes. I've made this bread before, and this time around made rolls for lunches during the week. It is wonderfully tasty for all kinds of sandwiches, especially reubens.

GENERAL NOTES:
1. I have no idea what "white rye" flour is, and in any event the bulk food store where I get my flour only sells one kind of rye flour.
2. I always find this dough to be rather wet and end up adding in plenty of bread flour so it can actually be kneaded. I'm not sure if this is because of the onions, or what. It still tastes great in the end, though.
3. I left out the caraway seeds because I don't really like them.
4. I made 4 oz rolls instead of loaves, and baked them at 400 degrees for 15 mins.

VEGAN NOTES
1. Replace buttermilk with soy milk.
2. Make vegan buttermilk by replacing 1 tbsp of the soy milk with apple cider vinegar and whisking.
3. Brush with soy milk instead of an egg wash.
Posted by Vegan Dad at 3:38 PM