Vegan Dad on the Road: Govinda's and Sweet Freedom

Only two days left in Philadelphia and then it's back home. I will miss the option of going out to eat but I can't wait to get back to the family (and my kitchen). Yesterday's stop was Govinda's. I had been there before and I don't think much has changed. Keep in mind that I am talking about the "Govinda's to Go" side of the restaurant--a small and slightly shabby take-out diner with slow service that largely serves vegan takes on American diner classics. It's a bit greasy and a little sloppy but I still think it's fun. I have yet to go to the fine dining side which is only open Thursday to Friday. I decided to get two things this time, and not the chicken cheesesteak since I had that last time. First up: the Kofta Sub. 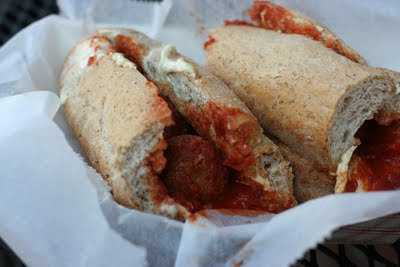 I liked it. The meatballs were a little mushy but I liked the spiciness with the tomato sauce and cheese. Next: fish sandwich. 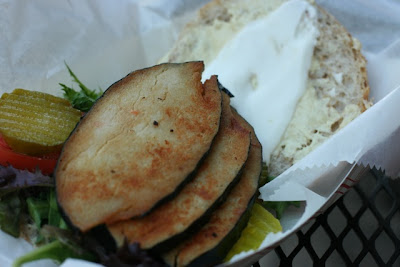 I have never had faux fish before and it was actually pretty good. By itself it had a rather fishy taste and texture (if you are into that kind of thing). I would have preferred tartar sauce to a glob of vegenaise and pickles, and I thought the "fish" got lost in all the toppings and bun. Govinda's is another place that suffers from very average bread. If only these veggie places could hook up with a quality bakery it would make things oh so much better.

Since it is only a few doors from Govinda's, I popped into Sweet Freedom. 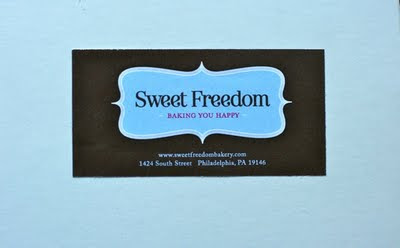 Many of you had recommended it and a few had not. As you well know I don't do gluten-free baking. I have nothing against it, it's just that I don't have a gluten intolerance and I really love bread. So, I'm not exactly sure how to review the stuff that I ate. It's not fair to compare it to its glutenated (is that a word?) counterparts, but it sounds patronizing to say it's good for gluten-free. But, I think that is what I am going to have to say. But first, let me tell you that a place like Sweet Freedom is my dream--a small, specialty bakery where I could serve up all sorts of awesomeness. Maybe in another life . . . . I really have to admire that variety of things Sweet Freedom offers: all of it soy, egg, corn, dairy, gluten, peanut, and refined sugar free. I got there at the end of the day and a lot of the stuff had been sold so I chose the Strawberry Double Chocolate Cookie Sandwich, and a Coconut Bliss Cupcake. 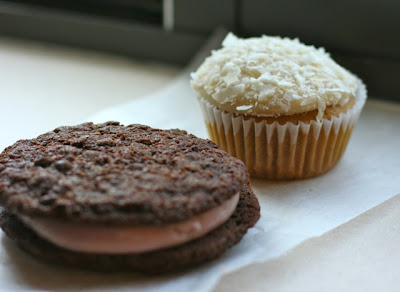 I wasn't crazy about the cookie sandwich--the filling had a toothpaste consistency, was too thick, and didn't taste very much like strawberry. The cookie was pretty crumbly . . . but then again it had no gluten to hold it together. The cupcake was better, I think, and was moist but really heavy and dense (and not worth $3.75). Again, no gluten. I would not go back, but I think if I had a gluten intolerance or allergies then this place would be a piece of heaven.
Posted by Vegan Dad at 10:06 AM