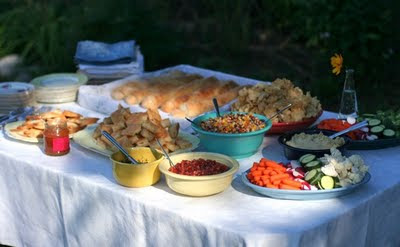 On Friday I hosted a reception for the new grad students entering our department. I made the food, others provided the drinks, and everyone had a good time. Despite a few early bacon jokes, the menu went over smashingly with everyone (even bacon boy). I think if the food is good no one cares if it can be labelled vegan or not.  Above is the savoury table. 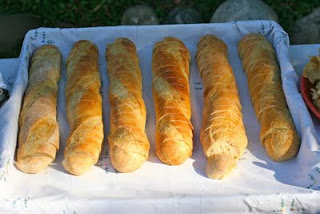 In the back left are sliced baguettes (Peter Reinhart, of course).  In front of that, a plate of focaccia. 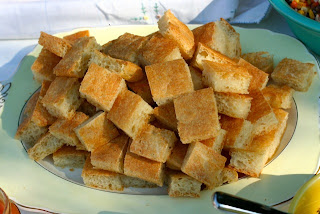 The idea was to use the bread a base for various toppings.  Pesto, for one.  The larger yellow bowl is garden fresh tomatoes with olive oil, balsamic vinegar, and salt and pepper.  Simply, but really tasty.  There was also hummus, along with plenty of veggies.  The only thing not made by hand was the tortilla chips.  I went with the "scoop" variety of chips so they could easily hold the bean salsa (black eyed peas and black beans with chopped yellow and orange pepper, red onion, celery, and corn.  All this was tossed in olive oil, white wine vinegar, and lime juice then seasoned.  I would have added jalapeno and cilantro, but sometimes that does not go over well at parties). 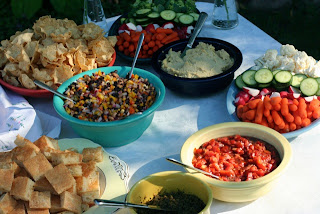 Rounding out the savoury table were samosas (curried potatoes and peas wrapped in phyllo and served with a mango chutney (oh, I bought that, too). 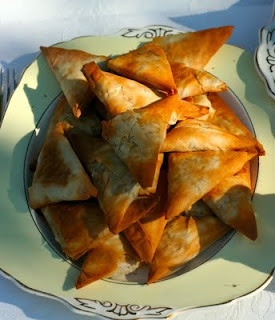 And here is the sweet table.  Ye olde classic fruit trays are at the end (berries and melons, mostly). 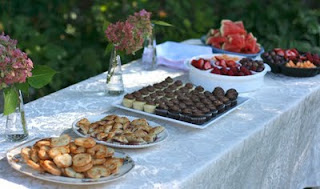 The mini cupcakes were a hit--chocolate and vanilla with mocha buttercream.  Simple, but tasty. 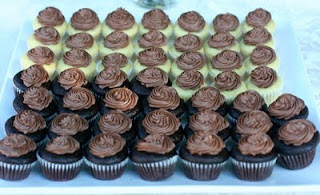 I also tried my hand at palmiers.  I will have to revisit these and post a recipe.  They did not stick together like I would have liked, but they tasted great and were not a lot of work. 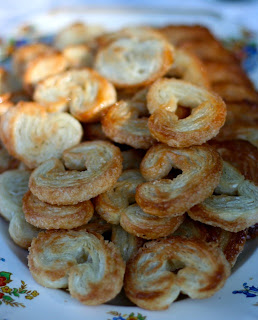 I also made a batch of mini turnovers (1 inch square pieces of dough) but found them too fiddly and did not make any more. 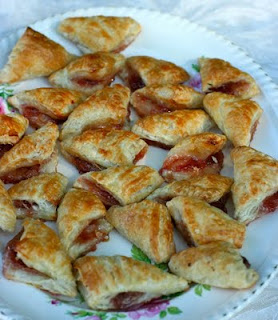 All the food could be eaten without a fork, which is great when you are standing trying to negotiate food into your mouth whilst not spilling your drink.

I made and baked the baguettes, focaccia, turnovers, palmiers, samosas, and cupcakes ahead of time and froze them.  The thawed cupcakes were iced on the day of the party, and the samosas reheated.  Pesto and hummus were made the night before, and fruit and veggies were cut the day of the party.
Posted by Vegan Dad at 9:05 PM

Email ThisBlogThis!Share to TwitterShare to FacebookShare to Pinterest
Labels: baking, dessert, party
Newer Post Older Post Home
All images and recipes (unless otherwise noted) are property of Vegan Dad. Please do not re-post or otherwise duplicate without permission.