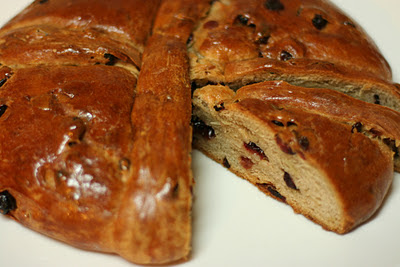 Sorry for the delay (bleedin' end of term grading!) but here is the final Christmas bread for the season.  It's the same dough recipe as the previous two, but with some added spices and a different shape.

METHOD
1. Make the panettone as directed, but add the spices listed above to the flour.
2. Add the fruit and nuts listed above, instead of those listed in the panettone recipe.
3. Firm up the dough by stretching and folding it on a floured surface.  Cut off 113 g of the dough.  Divide into two equal pieces, wrap in plastic, and place in the fridge.
4. Shape the remaining dough into a boule.  Place on a baking sheet lined with parchment paper, mist with oil, and loosely cover. Let rise for 90 mins, or until the dough has noticeably swelled.  Remove the refrigerated pieces of dough and shape into 2 eight inch ropes.  Gently lay them in a cross form across the boule.  Let rise for another 30 mins.
5. Preheat oven to 325 degrees.  Brush with soy milk and bake for 25 minutes, then rotate the pan and bale for another 30-35, or until the internal temperature reaches 185 F (85 C).  When the loaf comes out of the oven, brush with simple syrup (i.e. equal parts sugar and water brought to a boil).  Let fully cool before serving.
Posted by Vegan Dad at 9:09 PM