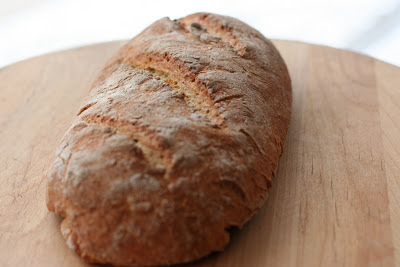 In the wake of the Vegan Sandwiches Save the Day! giveaway, I thought I'd post a few bread recipes to get you on your way to some great lunches.  As you know from all my previous baking posts, I am very familiar with gluten-filled baking.  And, while I have always been intrigued with gluten-free baking and what methods can produce tasty loaves, I have never explored it in any detail.  I was really looking forward to Peter Reinhart's new gluten-free cookbook and had it on pre-order for quite a while.  I figured if anyone could crack to code of wheat-free baking it would be him.  I love all of his previous books and find his recipes very easily veganizeable (usually eggs serve to enrich the dough and little else, and thus are easy to replace).  Not so this time.  All the recipes rely heavily on eggs and egg whites to give the bread structure and rise.  So, while it is easy to replace an egg or two in some enriched dough, it's not so easy to replicate the role 8 eggs whites are supposed to play in a wheat-free loaf.  Le sigh.

So, I was excited to discover Jennifer Katzinger's Gluten-Free and Vegan Bread.  I ordered it right away.  Katzinger's basic baking theory is gluten-free bread does not need to rise like its glutinous counterpart.  Instead, these loaves rely on oven-rise to give them some spring and a lighter crumb.  I decided to make a loaf for an NDP dinner party for which I was providing a variety of baked goods.  This country batard seemed like it would be a crowd pleaser.  Here is the recipe, taken from the preview on Amazon. 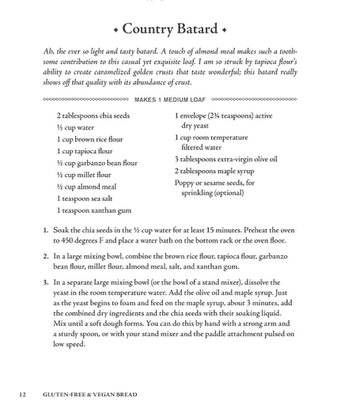 Now, if you are a baker you might be wondering how you can bake a loaf for almost 2 hours at 425+ degrees and not have it turn into a burnt brick.  Well, the answer is you can't.  The first thing that struck me as I read through the recipes were the incredibly long baking times (as long as four hours!).  I was dubious, but plunged ahead.  After an hour things were smelling burnt so I removed the almost black loaf from the oven.  So, while I like how these loaves come together (some may question the amounts of tapioca and/or arrowroot), I am perplexed with how way off the baking times are.  Thankfully, she does say that a loaf that reaches 205 to 210 degrees is baked.  So, armed with my thermometer, I tinkered around and found the following baking times produced a pretty impressive loaf:


An hour less baking time?  Can that be right? Making the recipe a third time I accidentally added 1.5 cups of water.  It meant that I had to shape the loaf with extra flour, but the oven rise was better.  That is the loaf you see pictured above.  I also made the following changes:
I also made the Soft Millet Sandwich Bread and the Quinoa Sandwich Bread.  Again, the baking times are a bit mysterious.  The two loaves are essentially the same ingredients and the same wet to dry ratio.  And yet, the Millet Bread is supposed to bake for 1 hour 45 mins, and the Quinoa Bread for 2 hours and 30 mins at 350.  I found that an hour sufficed.

So in the end I am not sure what to make of this book.  The basic ideas seem good, but the recipes are unreliable. But, if you have some baking sense, the end product can be tasty and not too dense. 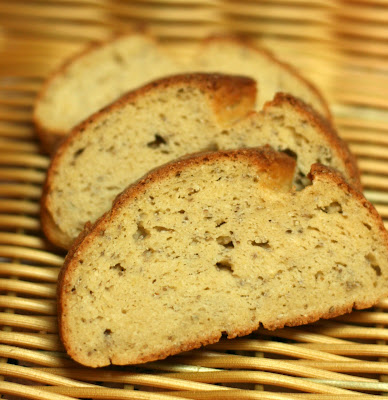 Email ThisBlogThis!Share to TwitterShare to FacebookShare to Pinterest
Labels: baking, gluten-free
Newer Post Older Post Home
All images and recipes (unless otherwise noted) are property of Vegan Dad. Please do not re-post or otherwise duplicate without permission.