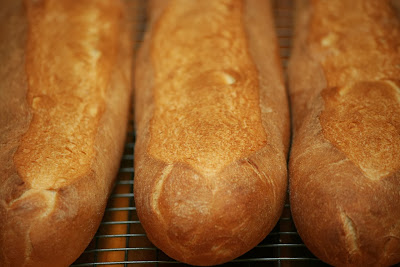 This is part one of a two-post series on making Banh Mi for a holiday party.  Yes, I know that Vietnamese sandwiches don't usually immediately jump to mind when planning a North American holiday party, but I have received very positive feedback on these.  I first made them for the vegans at our faculty association's holiday fling so that we could get some protein and not get relegated to the dip-less veggie tray.  They were a grand success and were enjoyed by veg and non-veg alike.

The trick is getting the right bread.  First time around I made a standard french baguette.  Fail.  The bread was far too chewy which meant people gnawing away while toppings came shooting out everywhere (all while trying to balance a drink and talk).  I have never actually had an authentic Banh Mi so I had to turn to the internets.  Lots of talk of light and crispy bread, and everyone was sure there was rice flour in the dough somewhere.  But few recipes.  I tried using some rice flour, but the end result was always dense and chewy.  So, I ended up going with a kind of baguette/hoagie roll hybrid--an enriched dough that can be made fairly quickly, has great flavour, has a soft crumb and crispy crust.

I weighed the flour, so the cup equivalents are pretty close--start with a little less and add more flour if needed.  Use a scale if you have one.

This makes 3 large baguettes.  If you are not having a party, half the recipe and make two smaller baguettes or a number of smaller buns.  I won't lay any claim to authenticity, only tastiness.

METHOD
1. Whisk together flours, salt, and sugar.  Whisk water and soy milk together, then whisk in yeast until dissolved.  Add liquid ingredients to dry, add oil, and bring together into a soft dough.
2. Knead for 5-8 mins, until smooth.  Shape into a ball, place in a large oiled bowl (turning dough to coat), cover and let rise in a warm place until doubled (about 1 hr).
3.  Punch down dough, reshape into a ball, then place back into the bowl.  Cover and let rise until doubled again.
4. Divide the dough into 3 equal pieces, trying not to degas the dough too much.  Shape as you would a french baguette (about 16 inches long--whatever will fit on your baking stone), then place in a couche, mist with oil, cover (I use plastic wrap to keep the crust soft), to rise for about 45 mins, or until almost doubled.
5. While dough is rising, place a baking stone in the middle of the oven and a steam pan on the bottom rack.  Preheat to 450 degrees.
6. Right before baking, slash each baguette right down the middle along the length of the baguette.  Slash about 1/3 of the way into the baguette (don't slash too shallow).
7. Transfer the baguettes from the couche to the baking stone and pour 1/2 cup of hot water into the steam pan.  Reduce heat to 400 degrees and bake for 10 mins.  Rotate loaves and bake for another 10 mins.
8. Remove bread to a cooling rack. 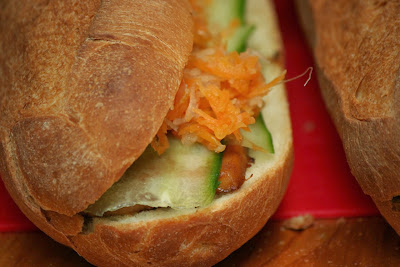