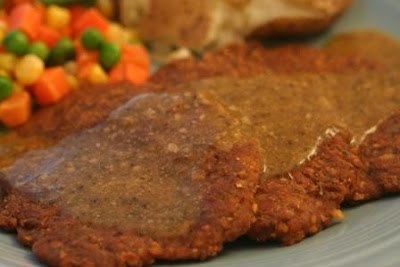 Before we get to the food, let me first say that I am tired of winter. Minus 28 degrees today and it is supposed to stay that way until the weekend. *sigh* But, enough of my whining. The idea for tonight was to make the chickpea cutlets from Veganomicon, but to modify the recipe slightly so that they could be pressed really flat and thin to mimic scaloppine. That part of the recipe was a grand success. I added this sauce, which was pretty good except that the nutritional yeast did not dissolve (as you can see in the pic).

For the Scaloppine
- make the following alterations to the chickpea cutlets from Veganomicon
1. Reduce wheat gluten flour to 1/4 cup + 2 tbsp
2. Replace bread crumbs with an equal amount of instant oatmeal, pulsed in a coffee grinder until coarsely ground (i.e. not fine like flour)
3. When dough is made, press golf ball-sized pieces flat with the heel of your hand as flat as possible. Fry for 2-3 mins per side.
For the Sauce
- 1/2 cup cooking sherry
- 1 cup vegetable stock
- 2 tbsp margarine
- 2 tsp cornstarch
- 1 tsp poultry spice
- 1 tsp dried sage
- 1 tbsp nutritional yeast (optional)
- 1 tbsp soy creamer
- salt and pepper to taste
METHOD:
1. When done frying the scaloppine, add sherry to the pan. Let bubble and reduce by about half. Add in 3/4 cup of the stock and margarine.
2. While margarine melts, add cornstarch to remaining stock and stir with a fork to dissolve. Add to pan and let thicken.
3. Add spices and yeast (if using), then creamer. Season to taste.
Posted by Vegan Dad at 8:01 PM

Email ThisBlogThis!Share to TwitterShare to FacebookShare to Pinterest
Labels: chickpeas, Veganomicon
Newer Post Older Post Home
All images and recipes (unless otherwise noted) are property of Vegan Dad. Please do not re-post or otherwise duplicate without permission.