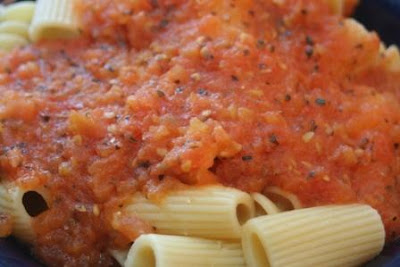 I went to the grocery store today and could not pass up the discount produce. Again! Big bags of tomatoes for 99 cents! So, I made my own marinara sauce for lunch. It was totally worth the extra work, and I will have to make it again when we have fresh tomatoes from the garden--then it will be spectacular. I think you are supposed to seed the tomatoes, but I did not bother since it would make even more work. I have given the recipe for about 6 cups of tomatoes, but you can double and triple if you want depending on how many tomatoes you have.

INGREDIENTS
- 6 cups of ground tomatoes
- 3 tbsp olive oil
- 2 cloves garlic, lightly crushed
- 1 tbsp dried basil
- salt and pepper to taste.
METHOD
1. Peel tomatoes by putting them in boiling water until the skins start to peel, then plunging them into ice cold water. Remove skins, quarter, then coarsely grind in a food mill. Drain off excess liquid using a fine mesh sieve.
2. Heat oil in a saucepan over medium heat and fry garlic until golden. Add tomatoes and season with basil and salt and pepper. Bring to bubbling and simmer until desired thickness is reached.
3. Remove garlic cloves and serve over hot pasta.
Posted by Vegan Dad at 8:36 PM

Email ThisBlogThis!Share to TwitterShare to FacebookShare to Pinterest
Labels: Italian, tomatoes
Newer Post Older Post Home
All images and recipes (unless otherwise noted) are property of Vegan Dad. Please do not re-post or otherwise duplicate without permission.