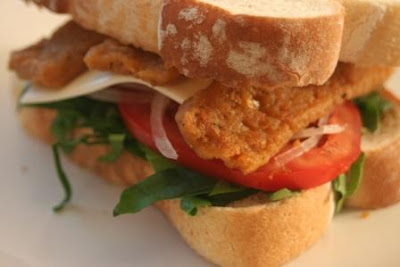 Tonight's self-imposed mission was to make vegan bacon (for a BLT) that tasted good but also had the chewy texture of "real" bacon. I have made tempeh bacon before from Vegan With a Vengeance, which was quite good, but I had no tempeh. Plus, while tempeh has a firm texture, it does not have a chewy texture. I thought seitan would fit the bill. I am not sure what I thought of the end result, but the kids loved it. As you can see, the colour is all wrong--these look more like chicken strips. The taste, however, was quite good. The jury is still out on the texture--it was chewy and crisp, but maybe a bit too chewy. I am going to post the recipe for those who want to play around with it, as I will be doing.

INGREDIENTS
- 1/2 cup of chickpeas
- 2 tbsp olive oil
- 1/2 cup water
- 2 tbsp Bragg's soy seasoning
- 1 tbsp HP Sauce (or BBQ sauce)
- 1 tsp liquid smoke
- 1 tbsp maple syrup
- 1 tsp sage
- few drops of browning sauce
- 1 cup vital wheat gluten
METHOD
1. Finely mash chickpeas with a fork in a bowl. Add everything else in but the wheat gluten and mix well. Add in wheat gluten and mix with a fork, then knead by hand for a few mins.
2. Heat a thin layer of oil in a frying pan over med-lo heat. While pan is heating, flatten dough out with the heel of your hand on a cutting board. Get as flat as possible.
3. Cut dough into thin strips resembling bacon (only thinner). Flatten each strip even more before placing in the pan. The thinner the better. Place in pan and cook for about 4-5 mins per side, until crispy and no longer "squishy." Add a little more oil to the pan, if necessary, when flipping bacon strips.
Posted by Vegan Dad at 8:36 PM

Email ThisBlogThis!Share to TwitterShare to FacebookShare to Pinterest
Labels: fake meat, seitan
Newer Post Older Post Home
All images and recipes (unless otherwise noted) are property of Vegan Dad. Please do not re-post or otherwise duplicate without permission.