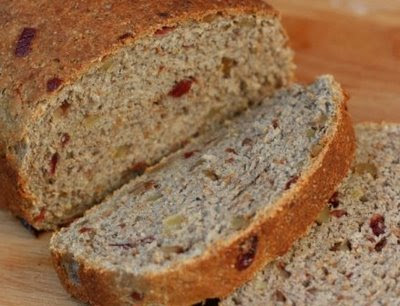 I throw this one out as a recipe/idea you can play with. I was thinking of ways to use up the rhubarb that is growing like crazy in the backyard. After a few rhubarb crisps I thought I would try to make a rhubarb bread. I really liked the end result: a dense but moist bread with that trademark rhubarb tang. And, because it has whole grains and rhubarb, there is enough fibre to totally clean your clock. I based the recipe on Peter Reinhart's whole wheat cinnamon bread, so I apologize for the wonky mix of measurements.

INGREDIENTS
Rhubarb Mix
- 2 1/4 cup chopped rhubarb
- 1/4 cup water
- 2 tbsp minced ginger
- 2 tbsp sugar
Dough
- 18 oz whole wheat flour (plus up to 1 cup more)
- 6 oz oat flour
- 1 tbsp instant yeast
- 2 tsp salt
- 1/3 cup brown sugar
- 3/4 cup oat bran
- 1/4 cup vital wheat gluten
- 6 oz soy milk, warm
- 1/4 cup oil
- 2 tbsp ground flax seed
- 1 cup chopped walnuts
- 1 cup dried cranberries (soaked in hot water for 10 mins, then fully drained)
METHOD
1. Place ingredients for rhubarb mix in a saucepan and bring to bubbling. Reduce heat, cover, and simmer for about 15 mins, until rhubarb is very soft and mushy. Remove from heat and let cool down to room temperature.
2. Place rhubarb mix in a large bowl and add all other ingredients (except the extra 1 cup of whole wheat flour). Bring together into a dough with your hands or with a stand mixer. Let sit for 5 mins (the bran will soak up some water and firm up the dough). Add in as much of the extra flour is needed to make a soft and slightly tacky dough. Knead of a floured surface for 10 mins, until smooth.
3. Place dough in a large, clean bowl, cover, and let rise in a warm place for about 90 mins, until doubled (or as near doubled as you can get it).
4. Divide dough in half and shape into loaves. Place in lightly greased loaf pans, cover, and let rise until loaves crest the top of the pan.
5. Preheat oven to 400 degrees. Place loaves on the middle shelf of the oven. Reduce heat to 325 degrees and bake for 20 mins. Rotate pans 180 degrees and bake for another 25-30 mins, until loaves are a nice golden brown and sound hollow when thumped on the bottom. Let cool on racks.
Posted by Vegan Dad at 8:21 PM

Email ThisBlogThis!Share to TwitterShare to FacebookShare to Pinterest
Labels: baking, rhubarb
Newer Post Older Post Home
All images and recipes (unless otherwise noted) are property of Vegan Dad. Please do not re-post or otherwise duplicate without permission.