Meat: That Stuff Will Kill You 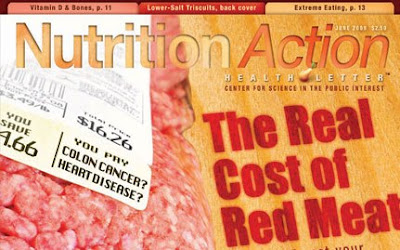 The U.S. National Cancer Institute recently released the largest study ever done on meat consumption. The findings? Those who ate 125 grams of red (beef and pork) and processed meat a day had a 30% greater chance of dying of heart disease and cancer than those who ate 20 grams a day. The study found that potentially carcinogenic N-nitroso compounds are formed in the gut when heme iron from red meat and gut bacteria trigger meat protein to combine with nitrites.

I read about the study in the recent issue of Nutrition Action. The coverage was interesting. According to Walter Willett of the Harvard School of Public Health, "if you go from eating meat twice a day to once a week, you can eliminate most of the risk." Most of the risk? Why not eliminate all the risk? Isn't this like recommending smoking one cigarette a day to reduce the risk of cancer? Nutrition Action gets in on the game, too. Even though grilling meat increases your risk of cancer, the editors offer a list of tips for "good grilling" to minimize the risk. And, while they condemn red meat for its environmental impact (55% of the erosion, 37% of pesticides applied, 50% of antibiotics consumed, 32% of nitrogen and 33% of the phosphorous load into the water supply in the U.S.), they let fish and poultry off the hook.
It's time for health advocates to promote veganism and quit this ridiculous charade of minimizing the risk of meat.
Posted by Vegan Dad at 4:23 AM

Email ThisBlogThis!Share to TwitterShare to FacebookShare to Pinterest
Labels: non food
Newer Post Older Post Home
All images and recipes (unless otherwise noted) are property of Vegan Dad. Please do not re-post or otherwise duplicate without permission.