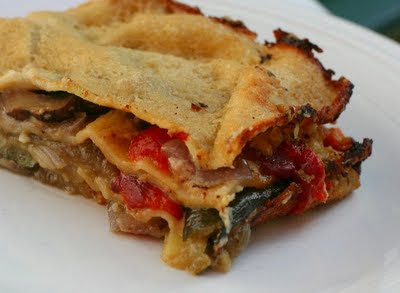 Vegan Mom gave me a beautiful extra deep, enamel-coated, cast iron lasagna pan for my birthday. Armed with my new fresh pasta recipe and a fridge full of veggies, I put together this lasagna. I'm not going to post an actual recipe since it did not come out perfectly, but I'll tell you what I did. The idea was to use this alfredo recipe combined with roasted veggies. I did not cook the alfredo sauce ahead of time, figuring that it would cook in the oven. The end result tasted amazing but the sauce did separate, giving it a curdled look. I wonder if cooking the sauce first would be a good idea. I also think the sauce should be a little thinner and that the arrowroot powder is not needed. Anyway, here is an idea you can play around with.

I put some sauce on the bottom of the pan, then layered sauce and veggies, and topped the final layer of noodles with a thick layer of sauce. I baked it for 1 hour, covered, in a 350 degree oven. Then I baked for 15 mins, uncovered, to firm up the top.

Let me just say that Son#1 absolutely hated this lasagna. In fact, I think it is the only meal he has refused to eat. I suppose the combo of onions, eggplant, zucchini, and mushrooms was just too much for him. He never actually took a bite but he was convinced that it was gross. To make it up to him I made a more traditional lasagna with veggie ground round, tofu ricotta, and vegan cheese on top. 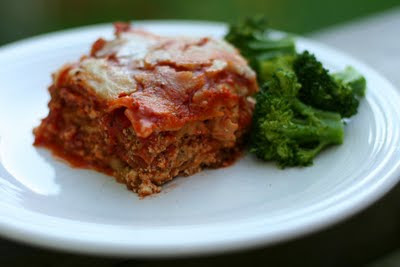 Email ThisBlogThis!Share to TwitterShare to FacebookShare to Pinterest
Labels: eggplant, Italian, mushrooms, pasta, zucchini
Newer Post Older Post Home
All images and recipes (unless otherwise noted) are property of Vegan Dad. Please do not re-post or otherwise duplicate without permission.