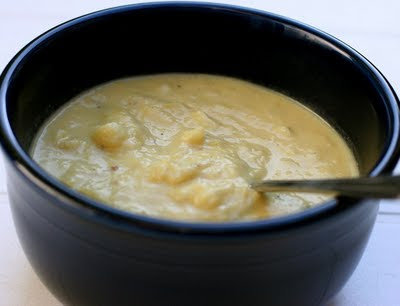 Say it! Say "chow-dah!" I don't think this is actually a chowder (when does soup become chowder, anyway?), but I wanted to go with an alliterative title. The temperature dipped down to 2 degrees the other night which suddenly put me in the mood for soup. Of course, now it's about 22 degrees, so that mood has passed. If it is still warm where you are, file this recipe away for later. It is creamy and chunky and perfectly satisfying. The boys loved it as well, which is great because they often balk at soups (or any dish where they can't identify the individual components or separate them out). The chowder has a slightly cheesy taste from the nooch and miso that is well-balanced by the leeks and roasted pepper.

METHOD
1. Heat oil and margarine in a large soup pot over medium heat. Add onion, garlic, and leeks and saute for 12-15 mins, or until reduced down and golden.
2. Add cauliflower and potatoes and water (salt the water if you want). Bring to bubbling, then reduce heat and cover. Simmer for 15-20 mins, until cauliflower and is very tender.
3. Remove half of the veggies with a slotted spoon. Add the roasted yellow pepper to the remainder and blend with an immersion blender until smooth.
4. Add removed veggies back to the pot along with the cashew cream. Add miso, mustard, and nutritional yeast and mix well. Season to taste, heat until just bubbling, and serve.
Posted by Vegan Dad at 8:45 PM

Email ThisBlogThis!Share to TwitterShare to FacebookShare to Pinterest
Labels: cauliflower, potato
Newer Post Older Post Home
All images and recipes (unless otherwise noted) are property of Vegan Dad. Please do not re-post or otherwise duplicate without permission.