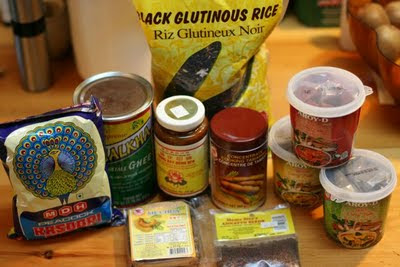 I have a habit of whining about the lack of ethnic food here in northern Ontario, but things just got a little better. For those of you who live in the Bay, TW Foods on Main Street has a respectable Asian food section. They must have expanded it recently because I remember going in there last year and not being too impressed. I thought I would share my finds with you all. Let's go right to left.

Kasoori Methi
Also known as sun dried fenugreek leaves. I could smell their pungent odour right through the packaging and found the claim that they were "hygienic, flavourful, and tasty" to be rather hilarious. I sprinkled some over some dal to boost the dish's flavour. Amazing.

Vegetable Ghee
I thought this was worth a try, but basically it is corn oil. It didn't add much to the dish I made, but the can did assure me it was fine to use for religious observances.

Sweet Soy Bean Paste
Less sweet that hoisin sauce and with a more complex flavour than soy sauce. A great way to thicken a stir fry sauce while adding some flavour.

Tamarind Concentrate
This takes all the work out of soaking dried tamarind (which you can see in the very front, left). Throw some into a Thai dish for a nice tangy flavour.

AROY-D Curry Pastes
These are actually pretty good for pre-fab pastes. I bought red, green and yellow and am happy with all three. The bonus is that they do not have and fish sauce in them. Besides chiles, they are made with galangal, garlic, shallots, kaffir lime peel, and lemongrass.

Black Glutinous Rice
I have yet to use this, but I do have a recipe for Thai rice pudding that I think would be easy to veganize.

Annatto Seeds
These are used in Caribbean dishes, I believe. I remember seeing them in a recipe somehwere, so I bought them on a whim.
Posted by Vegan Dad at 9:42 PM

Email ThisBlogThis!Share to TwitterShare to FacebookShare to Pinterest
Labels: Asian
Newer Post Older Post Home
All images and recipes (unless otherwise noted) are property of Vegan Dad. Please do not re-post or otherwise duplicate without permission.