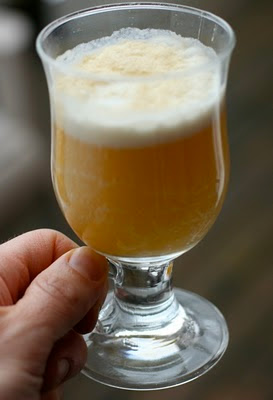 Vegan Mom came up with the great idea to make New Year's Eve a Harry Potter Day for the kids. We played Potter-related games, watched The Goblet of Fire, and ate Potter-inspired food. The kids had a blast and so did I, though I have a lot more sympathy for the house elves now. When we solicited the kids for food ideas, butterbeer was at the top of the list. The Googles pointed me to a variety of recipes, all similar in that they mixed some kind of butterscotch flavour or syrup with soda (usually cream soda). The recipe posted on this blog looked the best to me, though perhaps is the most complicated. Of course, it needed the appropriate veganizations. Here is what I did:

METHOD
1. Place brown sugar and water in a small saucepan over medium heat, stirring constantly until mixture reads 240F on candy thermometer.
2. Remove from heat and stir in the butter, salt, vinegar and 1/4 cup of coconut milk. Set aside to cool to room temperature. When cool, mix in rum extract.
3. To serve: pour 2-3tbsp of the butterscotch mixture into the bottom of a small glass. Add in some cream soda and mix well. Top up with more cream soda. Then, pour about 2 tbsp of coconut milk down the back of a spoon on top.

VERDICT: This stuff will put you in a sugar coma in 2 seconds flat. The link above suggested using club soda, so you could try that. It's not exactly the warming beverage the books describe, but it's not bad. I did not use all the butterscotch syrup, but that's OK--it will be awesome over ice cream.

I also made pretzels that are supposed the be shaped like the deathly hallows symbol. Each pretzel is 3oz, brushed with some margarine after baking (450 for 15 mins), and sprinkled with a little kosher salt. 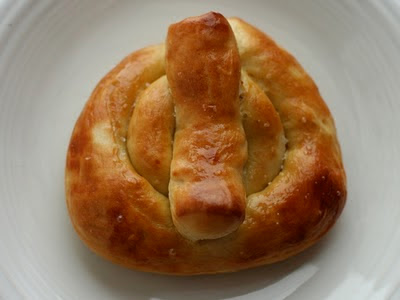 Email ThisBlogThis!Share to TwitterShare to FacebookShare to Pinterest
Labels: baking, beverage, Harry Potter
Newer Post Older Post Home
All images and recipes (unless otherwise noted) are property of Vegan Dad. Please do not re-post or otherwise duplicate without permission.