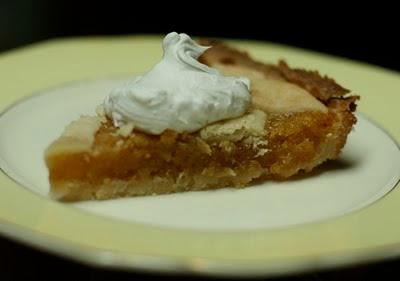 Behold, part two the Harry Potter party recipes! I have never had treacle tart in my life and so I had no idea what I was getting into when the boys requested this English favourite for their party. It took me two tries to get the recipe right. I started with this recipe. My first mistake was glossing over the part of the recipe that called for fresh bread crumbs. I thought it was a little weird that the tart filling would use bread crumbs but, after cracking a few jokes about English cuisine, I charged ahead with regular ol' dried bread crumbs. Quelle disaster. The tarts baked up so hard you could sand the floor with them. My second mistake was using water in the shortbread crust--that makes it bake up like concrete. I then checked out this recipe. I thought the proportion of syrup to bread crumbs looked better in this recipe, but was dubious that it would make enough filling to fill a 9" crust. So, after much trial and error, here is my recipe (and it was really tasty).

METHOD
1. Sift flour, icing sugar, and salt into a bowl, then cut in margarine until mixture resembles coarse bread crumbs.
2. Press 2/3rds of the mixture into a 9" pie pan, making about a 1" lip. Drizzle a few drops of oil over the remaining dough and press it into a ball. Wrap the dough ball in plastic, cover the pie plate in plastic, and refrigerate for 30 mins.
3. Preheat oven to 375. When crust has cooled, prick the bottom with a fork, line with aluminum foil, and fill with dried beans (or pie weights). Bake for 15- 17 mins, until just lightly golden. Remove beans (or weights) and parchment. If the bottom of the crust seems moist, return to the oven for 1-2 mins to dry out. Remove and let cool. Make the filling.

METHOD
1. Heat syrup in a saucepan over med-lo heat, until runny. Add breadcrumbs, lemon rind and juice, and mix well. Pour into cooled crust.
2. Roll out remaining crust in a lightly floured surface and make a lattice top. Protect pre-baked crust with foil, and bake for about 24 mins, until pastry is golden and filling is set. Serve warm.

I noticed that clotted cream is a popular addition to a slice of treacle tart. You could try this recipe. I did not have the required ingredients, so I whisked 1 tbsp of sugar into the cream scraped off the top of a can of coconut milk left in the fridge. 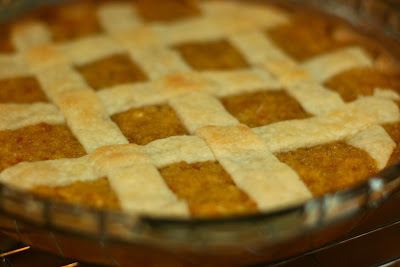 Email ThisBlogThis!Share to TwitterShare to FacebookShare to Pinterest
Labels: baking, Harry Potter
Newer Post Older Post Home
All images and recipes (unless otherwise noted) are property of Vegan Dad. Please do not re-post or otherwise duplicate without permission.