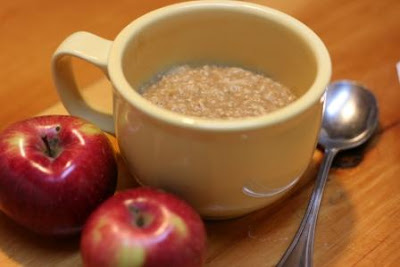 Behold my second installment of trying to make breakfast more interesting for the kids. Not really a recipe tonight; more of an idea that you can play around with. And not even a very original idea, really. Sons #2 and #3 gobbled it right down, but Son #1 whined ad nauseum about it until the oatmeal had congealed into a dense mass and the whole thing was cold and kind of nasty. *sigh* Maybe boxed cereal isn't so bad after all . . . .

INGREDIENTS
- oatmeal (I use quick cook/instant on busy mornings)
- cinnamon
- ginger
- nutmeg
- allspice
- cloves
- maple syrup
- grated apple
- raisins
METHOD
1. Cook oatmeal as per directions on package. Spice to taste using some or all of the spices above, then stir in some grated apple and raisins. Tastes great on a cold fall morning.
Posted by Vegan Dad at 9:20 PM

Email ThisBlogThis!Share to TwitterShare to FacebookShare to Pinterest
Labels: apple, breakfast, Vegan Mofo
Newer Post Older Post Home
All images and recipes (unless otherwise noted) are property of Vegan Dad. Please do not re-post or otherwise duplicate without permission.