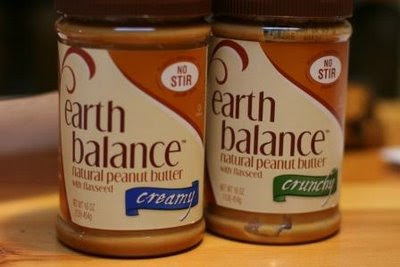 I mentioned a few days ago that Earth Balance sent me some of their new peanut butter to check out. So check it out I did. I personally am a big fan of peanut butter and find myself taking a classic PB&J sandwich to work several times a week. I usually buy Kraft peanut butter, probably because my mom bought the all natural stuff when I was a kid (deriding Kraft as peanut butter icing) and I am still in some stage of teenage rebellion. So, what is the big deal with Earth Balance peanut butter? Obviously it's no great coup to make a vegan peanut butter so I will admit that news of the new product was a little less exciting than when I discovered Earth Balance margarine. The big deal, it seems, is with the fat. Kraft uses hydrogenated oil, which I thought created trans fat, though the jar I have here states that it has 0g of trans fat per serving (in Canada, they have to report 0.1g or more). Earth Balance does not hydrogenate oil but rather uses expeller-pressed oil. Specifically, they use palm fruit oil (not palm kernel oil). The literature they gave me states that palm fruit oil is "quite healthy" (I am sure some of my readers will want to comment on that) because it is about 45% saturated and lower in lauric and mysritic acid than palm kernel oil. What this translates into is a no-stir peanut butter that is stable at room temperature without the aid of hydrogenation.

OK, enough talk about fats, what about the taste? Earth Balance uses agave as a sweetener which makes the peanut butter less bland than all natural but less sweet than Kraft. The taste is more salty than sweet (55mg of sodium per 1 tbsp) and has a very nice roasted flavour.
The peanut butter will retail in the U.S. at prices ranging from $3.99 to $4.49 for a 16oz jar at places like Whole Foods, Trader Joe's, Safeway, and Wegman's, but are not yet available in Canada (son of a . . . !). I certainly hope I can buy more in the near future. You can find out more here.
Posted by Vegan Dad at 3:20 PM

Email ThisBlogThis!Share to TwitterShare to FacebookShare to Pinterest
Labels: Vegan Mofo
Newer Post Older Post Home
All images and recipes (unless otherwise noted) are property of Vegan Dad. Please do not re-post or otherwise duplicate without permission.