Come to the Table: A Book Review 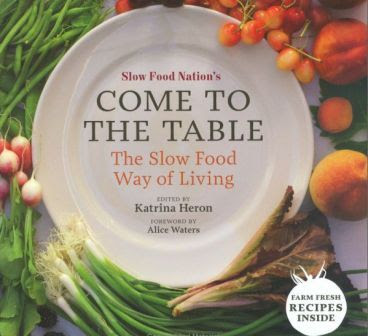 Last month a rep from Rodale Books contacted me about reviewing Come to the Table: The Slow Food Way of Living on my blog. I agreed, so here it is.
Although the slow food movement started in 1989, it seems like the idea of locally grown whole foods is gaining more traction today than even before. A 2001 study concluded that the average piece of food travels 1,500 miles before it reaches your plate, a staggering number considering today's fuel prices and the cost to the environment. While this number has been disputed, there is no question that our food supply comes from countries far and wide. A trip to the grocery store will reveal garlic from China, and grapes from Chile. In response, the word locavore has now entered the lexicon.
The Slow Food movement is essentially combination of the organic and local food trends. According to Come to the Table, slow food is about countering industrialized farms by producing food via "ecologically sound and humane methods." The point, then, is to eat real food produced locally and organically.
Come to the Table is a collection of stories edited by Katrina Heron about farms in California that have adopted the slow food mentality and are trying to make a profit in a market economy dominated by factory farms. Combined with beautiful colour photos, these stories make you want to flee the city to get back to nature and in touch with the earth. Of course, the authors make no bones about the fact that it is back breaking work and certainly not a life of fame and fortune. Interspersed between the chapters are tips for living a slow food life, and brief explorations into the issues facing farmers like USDA organic certification. The book ends with over 40 simple recipes, in keeping with slow food philosophy.
Although the slow food movement is rather appealing to vegans (especially those whose veganism is tied to environmental concerns), slow food also embraces meat, egg, and dairy production. This raises several interesting questions that readers may want to discuss in the comments below. Does small-scale, humane, ecologically sound meat production negate the need for veganism? Would you eat eggs that came the kind of farm described in Come to the Table? Do these farms, while more attractive than factory farms, still perpetuate an ideology based on human dominance of animals? Do you oppose animal husbandry? What about the impact on health from saturated fat, regardless of how the meat and eggs are produced? Can the population really be sustained by small farms? The list could go on and on.
In the final analysis, Come to the Table is an interesting read, but I am not sure it is worth the $32.95 (CAN) price tag. While the farm stories are interesting, I would have preferred more practical tips on growing your own food. The information given is scant, and none of it particularly insightful (have your own herb pot, for example). The recipes are solid, but not worth buying the book for. While they do focus quite a bit on vegetables, there are also many meat and dairy-based recipes that are of little use to vegans. Curiously, one of the recipes calls for instant pancake batter, which doesn't strike me as particularly slow food-esque. Whether you buy the book or not, it is certainly worthwhile to tap into local food networks wherever you live. Support your local farmers' market, try to buy organic, grow your own, and try to eat food that remembers where it came from. That is what slow food is all about.
Posted by Vegan Dad at 8:14 PM

Email ThisBlogThis!Share to TwitterShare to FacebookShare to Pinterest
Labels: non food, Vegan Mofo
Newer Post Older Post Home
All images and recipes (unless otherwise noted) are property of Vegan Dad. Please do not re-post or otherwise duplicate without permission.