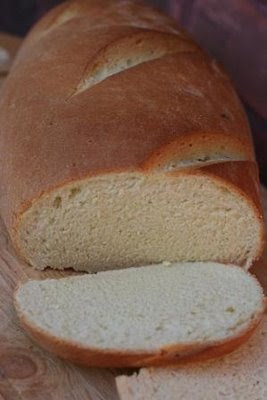 I was all wrapped up following the election last night, so sorry about the lack of a post. I am able to vote in Ohio, and as an American historian I was extremely interested in the outcome. Plus, whatever happens in the U.S. has an impact on us here in Canada. I was also reminded that while we Canadians often pride ourselves in our diversity and in thinking we are more liberal-minded than our neighbours to the South, we have yet to elect a person of colour as Prime Minister. We have had only one female PM (for four months, when Brian Mulroney quit), but she was soon defeated in the 1993 election. Our latest election was almost entirely a slate of white guys.

I am busy with the bakery tonight, so just a small post about a failed bread recipe. I thought I would experiment with a semolina yeast bread to go with some pumpkin soup. The end result was nice and soft but far too dry, I thought. The crust sucked all the moisture from your mouth, and the next day the loaf was pretty hard. I shan't be making it again.
Back tomorrow with another great Indian recipe.
Posted by Vegan Dad at 8:53 PM

Email ThisBlogThis!Share to TwitterShare to FacebookShare to Pinterest
Labels: baking, non food
Newer Post Older Post Home
All images and recipes (unless otherwise noted) are property of Vegan Dad. Please do not re-post or otherwise duplicate without permission.