Blog Tour: Vegan Soups and Hearty Stews for All Seasons 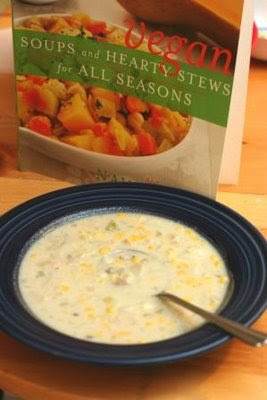 Tonight I am doing something different. Nava Atlas asked me to be part of a blog tour for her latest book, Vegan Soups and Hearty Stews for All Seasons (it's actually the 4th edition of a cookbook she originally published as Vegetarian Soups For All Seasons). The idea is for various bloggers to try a recipe from the book and then blog about it on an assigned day. Neat, eh? The cookbook is divided into the four seasons with plenty of soups and stews in each. From Harvest Stew to Carrot Bisque to Asparagus and Spinach Soup to Melon Medley, this cookbook has over 1o0 recipes for you to try. The final chapter contains recipes for breads, muffins, and biscuits to complement all that soupy goodness.

I chose the New England Clam-less Chowder, being in the mood for something hearty. I have never had actual clam chowder so I can't comment on how it compares, but I will say that it was very, very tasty. Son # 2 described it as "super good," and Son #1 also gave it the thumbs up. I did make one change. The original recipe called for baked tofu to replace the clams, but I didn't have any. Instead, I used chopped king oyster mushrooms. It worked perfectly since the mushrooms have a bit of bouncy chew to them--kind of like what I imagine the texture of a clam would be. Son #1, who claims to hate mushrooms, immediately asked what the chunks were in his soup. Wanting to avoid a huge argument over picky eating, I just said "fake clams." "They are really good!," he replied, and ate up his soup.
Posted by Vegan Dad at 9:17 PM

Email ThisBlogThis!Share to TwitterShare to FacebookShare to Pinterest
Labels: cookbooks, soup
Newer Post Older Post Home
All images and recipes (unless otherwise noted) are property of Vegan Dad. Please do not re-post or otherwise duplicate without permission.