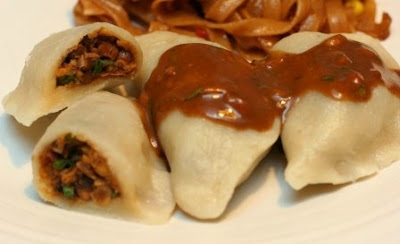 If my kids aren't watching WALL-E these days, they are watching Kung Fu Panda. The upside of this is that they are more receptive to all sorts of Chinese food. If you have seen the movie, then you will understand why they were very keen to try some dumplings. The question was what to fill them with. The boys are not crazy about the tempeh filling in the Chinese Tempeh Buns I made last week, so I went with pulsed chickpeas. That was a good move. These are awesome! I based them on a recipe from an old Martin Yan cookbook which called for the dumplings to be boiled, but I am sure you could steam them as well.

INGREDIENTS
Makes 15 dumplings
Filling
- 1 can chickpeas, rinsed and drained
- 2 green onions, sliced
- 1/2 cup dried mushrooms, soaked and chopped
- 2 tbsp chopped cilantro
- 1 tbsp light soy sauce
- 1 tbsp hoisin sauce
- 1 tbsp sherry
- 1 tbsp cornstarch
- 1" piece of ginger, minced
- 1 tsp sesame oil
Dough
- 1 1/2 cup all purpose flour
- 1/2 cup boiling water
METHOD
1. Make the dough by mixing the boiling water into the flour with a fork. Knead on a floured surface, adding enough flour to make a soft dough that is not sticky. Shape into a 15" cylinder, cover with a damp towel, and let rest for 30 mins. Use the extra water from the kettle to soak the mushrooms.
2. While dough is resting, get 12 cups of water on its way to boiling in a large pot.
3. While dough is resting and water is heating, pulse the chickpeas in a food processor. Place in a large bowl and add the rest of the ingredients. Mix well.
4. To make the dumplings, cut a 1" slice off the dough cylinder and flatten on a floured surface into a 3-4" circle. Place some filling in the middle, then fold the circle in half and seal the edges. Cover with a damp cloth, then repeat with remaining dough and filling.
5. To cook the dumplings, add as many dumplings to the pot as you can without crowding. Stir to keep them separated. When water returns to boiling, add 1/2 cup of cold water. Return to a boil and cook, stirring, until dumplings float. Remove with a wire strainer and serve.
I made a peanut sauce that I wasn't to happy with, but you could try this peanut sauce I made before. Or, use a sauce of your choice.
Posted by Vegan Dad at 9:03 PM

Email ThisBlogThis!Share to TwitterShare to FacebookShare to Pinterest
Labels: Asian, chickpeas
Newer Post Older Post Home
All images and recipes (unless otherwise noted) are property of Vegan Dad. Please do not re-post or otherwise duplicate without permission.