Last year we had two families over for a mother's day brunch. This year, we went crazy and had 20 people over. It was, if I do say so myself, a grand success! Both kids and parents stuffed themselves to capacity with purely vegan fare and no one made a single joke about bacon. So, let's take a look at the spread: 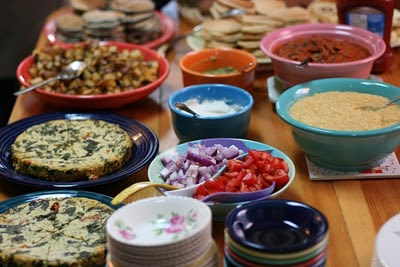 In the front on the left are two spinach and sun-dried tomato frittatas, based on Isa's swiss chard frittata from Vegan Brunch. 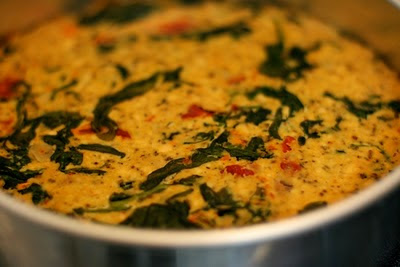 I had two bags of baby spinach I had intended to use in an Indian dish this week but never got around to making. I figured sun-dried tomatoes would make the perfect accompaniment (they did). I was a little worried about the whole thing holding together so I added 2 tbsp of chickpea flour. The end result was amazing: nice and tender and bursting with flavour. I scaled back on the soy and seasoned with black salt to get a nice eggy flavour.

On the front right is polenta rancheros, also from Vegan Brunch. What you are looking at is a bowl of soft polenta, a bowl of black beans in rancheros sauce, and a variety of fixins (red onion, tomato, cashew sour cream, guacamole). This is a fantastic dish. You start with some beans, add a dollop of polenta, then garnish. This one is going into my brunch rotation.

In the back are oven roasted potatoes, and piles of pancakes (also Isa's recipe from Vegan Brunch.) 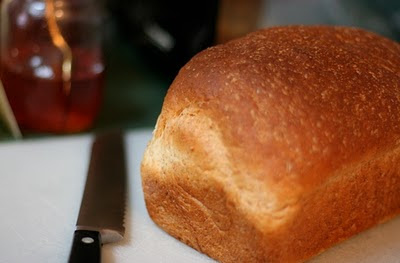 I also made some whole wheat bread for toast. 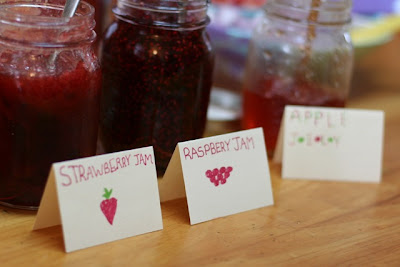 Son#1 made these signs for all the homemade jams and jellies. 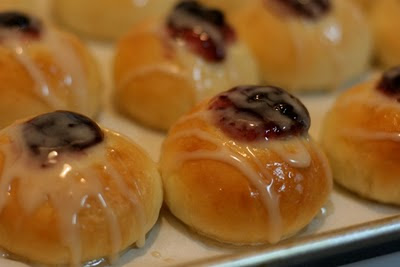 In addition to cinnamon buns, I made these thumbprint rolls from Reinhart's Artisan Breads for Everyday. These are a sweet roll filled with fruit and glazed with icing, and they disappeared pretty quickly. I put the fruit filling in a piping bag and I found that to be an effective way to get maximum filling in without making a huge mess.

The guests brought muffins, fruit salad and trays, juices, and coffee and tea.
Posted by Vegan Dad at 5:01 PM

Email ThisBlogThis!Share to TwitterShare to FacebookShare to Pinterest
Labels: baking, brunch
Newer Post Older Post Home
All images and recipes (unless otherwise noted) are property of Vegan Dad. Please do not re-post or otherwise duplicate without permission.