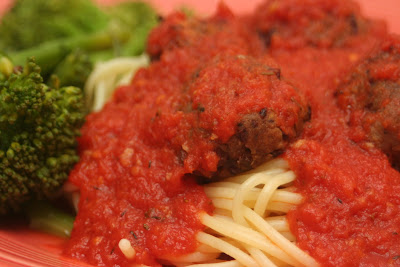 Veganomicon strikes again! I spent the day putting insulation in the attic, so Vegan Mom and Vegan Mom-in-Law swung into action and made tonight's tasty meal. It was a grand success, and everyone (especially the kids) bolted it down like it was their last meal. The bean balls were tender but still held their shape (though we decided (as an autonomous collective) to keep them out of the sauce until right before they were served, lest they sog), and the marinara was the perfect. Thanks, Isa!

I know some people hate to see pics of food with no recipes, but hopefully this will encourage you to support vegan chefs and the cookbooks they write.
Posted by Vegan Dad at 10:40 PM

Email ThisBlogThis!Share to TwitterShare to FacebookShare to Pinterest
Labels: beans, Italian, Veganomicon
Newer Post Older Post Home
All images and recipes (unless otherwise noted) are property of Vegan Dad. Please do not re-post or otherwise duplicate without permission.