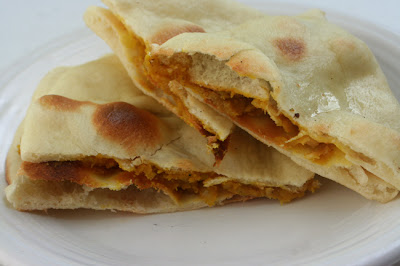 I have been craving Indian food (probably because the weather is finally getting hot around here) but I also want to keep this month's quest to make kid-friendly meals in mind. So, this is an attempt to introduce kids to mild Indian flavours with a convenient hand-held presentation. The recipe calls for tumeric which adds a nice flavour but is almost impossible to get out of clothing (or carpet) if your food spills. So if you have messy eaters or real young kids you might want to hold off on the tumeric until more food ends up in their mouths than on the floor. I have also kept the spicing mild for the kiddies, so you can adjust to your own taste.
INGREDIENTS
- 4 naan bread (see note below)
- 1/3 cup red lentils (the wee tiny ones)
- 1 cup water
- 1 small onion, finely diced
- 1 clove garlic, minced
- 1/2 tsp tumeric
- 1/3 cup chickpeas, mashed with a fork
- 1/2 tsp chili powder
- 1/2 tsp coriander
- 1 tsp salt
METHOD
1. Rinse lentils in a mesh sieve then put in a saucepan with water, onion, garlic, and tumeric. Bring to bubbling and simmer, uncovered, stirring regularly, until lentils are cooked and starting to break down into a paste.
2. Add mashed chickpeas and spices according to taste. Stir well and remove from heat.
3. Spread half of the lentil mixture on a piece of naan. Top with a second piece then cut into 6 triangles. Repeat with remaining naan and lentil mixture.
A NOTE ON NAAN
I made the naan recipe found here and it was spectacular. The dough is easy to make and the method makes for a light, puffy, and slightly crisp naan. Just sub soy yogurt for dairy yogurt, and melted Earth Balance for the ghee. Also, after rolling out the naan, let them sit for 20 mins on the counter--this will help them puff up in the oven. I removed my naan from the oven about 30 seconds after they puffed up so the top was still soft. 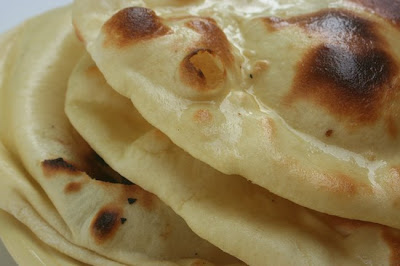