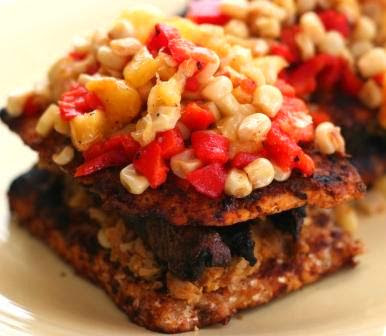 I decided that since it was Sunday I had some time to do a wee bit of grilling. They don't have a propane BBQ where I am staying so I purchased some hardwood charcoal at Trader Joe's and went totally old school. The idea for the dish started with a packet of jerk seasoning I bought at the Reading Terminal Market the other day. As far as jerk seasoning goes, it is fairly mild. I thought it would taste good with tempeh and so I began constructing what was in my mind was a terrine-like dish. In the final analysis, I don't think it works as a coherent dish, but all the different elements of the dish are tasty (I particularly like the roasted peaches). I am posting the recipe and you can do with it what you want. Instead of tempeh on the top and bottom I think it would work better to pile everything on a slice of tempeh.

INGREDIENTS
Marinade
- 1 tbsp oil
- 1/4 cup orange juice
- juice of 1 lime
- 1/2 tsp salt
- 3 tbsp jerk seasoning (or to taste)
- 1 pkg tempeh, cut in half vertically and horizontally
- 1 portabello mushroom
- 1/2 red pepper
- 1/2 cup (frozen) corn
- 1 large peach peeled and halved
- salt and pepper
- 1 cup chickpeas
- 1/2 tsp jerk seasoning
- 1/4 tsp salt
- splash of oil
METHOD
1. Combine ingredients for the marinade and marinate tempeh and mushroom for a few hours. Steam or boil the tempeh first if you think it has a "taste."
2. Make 2 rectangular containers out of heavy duty foil. Place corn in one. Toss chickpeas with spices and oil and place in another. Wrap peach in foil.
3. Start roasting the red pepper (BBQ should be nice and hot). When skin in blackened, remove from grill and place in a bowl. Cover with a lid and let steam.
4. Place corn and chickpea foil containers on med-hi grill (stir every min or so to keep stuff from sticking). Place peach on the grill, turning every few mins. Grill tempeh and mushrooms, basting with extra marinade, until done. Mushrooms should have released some water, tempeh should be golden, as should corn and chickpeas.
5. Remove skin from roasted pepper. Chop pepper and peach, and mix with roasted corn. Season with salt and pepper.
6. Mash chickpeas with a fork (add splash of water, if needed). Slice mushroom.
7. Put a tempeh slice on a plate. Top with mashed chickpeas and mushroom slices. Top with another tempeh slice (if you want) and peach salsa.
Posted by Vegan Dad at 6:42 PM