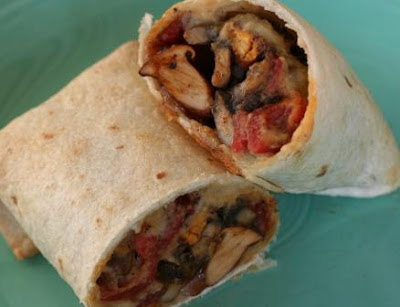 This dish is based off of a wrap I had on the weekend at a place called Marathon Grill, a wrap I thought could be much improved. The chanterelle mushrooms give a wonderful flavour and texture to the filling, and they are complemented by the smoked paprika. The cheese is entirely optional here, but it does add a bit of salty, fatty, flavour which is nice. I used Veganrella, which I have never had before and which I have to admit is rather interesting/nasty on its own. But when mixed with other flavours it really works. I also baked the wrap which begs the question: when does a wrap become a chimichanga?

INGREDIENTS
Makes 2 wraps
- 1 tbsp oil
- 2 large flour tortillas
- 1 portabello mushroom, sliced
- 1 roasted red pepper, skinned and sliced
- 1/2 cup chanterelle mushrooms
- water
- 1/2 tsp chili powder
- 1/2 smoked paprika
- salt and pepper to taste
- 1/2 cup roasted garlic hummus
- shredded vegan cheese
METHOD
Preheat oven to 450 degrees
1. Heat oil in a frying pan over medium heat. Fry portabello mushrooms for 5-7 mins, until mushroom softens and begin to release its water. Add a splash of water, if needed. Add roasted pepper to the pan and fry for 2 mins.
2. Add chanterelle mushrooms and fry for 3-4 mins, until they begin to soften a bit. Add spices and season to taste, adding a splash of water to help mix all the spices into the mushrooms. Remove from heat.
3. Spread 1/2 of the hummus in a thick layer in the middle of each of the tortillas. Top with 1/2 of the mushroom mixture. Top that with as much cheese as you see fit. Wrap up, tucking in ends, and place seam side down on a baking sheet.
4. Spray each wrap lightly with oil. Bake for 20-25 mins, until golden. Let cool, then serve. You can eat it with a fork, or let it cool more and eat it with your hands.
Posted by Vegan Dad at 8:25 PM

Email ThisBlogThis!Share to TwitterShare to FacebookShare to Pinterest
Labels: mushrooms
Newer Post Older Post Home
All images and recipes (unless otherwise noted) are property of Vegan Dad. Please do not re-post or otherwise duplicate without permission.