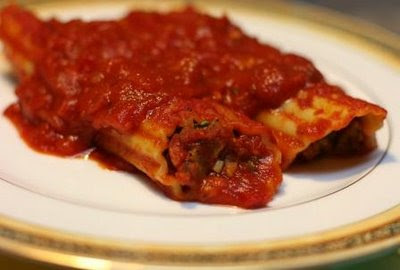 So Vegan Mom and I finally celebrated our 10th anniversary (as you can see, we got out the fine china for the first time in about 10 years). Of course, the fates conspired against us making sure that disaster struck in the kitchen and that 1 boy would refuse to go to sleep. *sigh* Now, I am usually in total control in the kitchen--so much so that when things go awry I don't take it too well. Disaster one: I blended the seitan sausages for the filling while they were still warm. Big mistake. Instead of becoming like finely ground meat, they turned into a paste. Fortunately, I had only put half of the sausage in so I had some back up. Disaster two: the dessert. In my mind I envisioned something like mini black forest cakes. The cream filling was to be this recipe. The other time I made it it was thick and rich. This time: thin and runny. Certainly no good for cake filling. I rushed to make a quick buttercream, but only had a wee bit of margarine. In all the rush to make frosting (and a good 10 mins of mumbling/cursing under my breath) I did not have time to make the cherry sauce. I contemplated coating the cakes with a thin ganache but just didn't have the energy (remember that one kid is still coming down the stairs claiming he can't sleep). We just ate the half-made cakes with ice cream and called it a night. 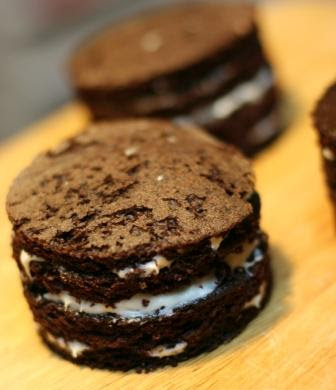 Here is the half-made dessert. Someday I will revisit this someday and make it into something. The cake is Isa and Terry's basic chocolate cupcake recipe baked in a greased and floured 9 x 13 pan, then cut with a biscuit cutter. Tasted great.
Posted by Vegan Dad at 7:13 PM