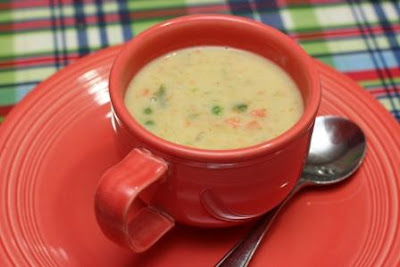 Back in the day (read: when I was an undergrad) I use to make a quick and easy corn chowder: 1 can cream of celery soup, 1 can cream of potato soup, 1 can corn, 1 cup of milk. This recipe is an attempt to recreate something like that chowder. I didn't realize that we were totally out of corn (the frozen kind--I don't really go for canned), so I had to go with mixed veggies. That was OK, though, since it gave the soup some colour. If you are in the mood for a thick and creamy chowder, then this is the soup for you.

INGREDIENTS
Serves 4
- 2 tbsp oil
- 1 large onion, finely diced
- 3 stalks of celery, finely diced
- 1 lb potatoes, peeled and diced
- 1/4 cup water
- 1/2 cup soy creamer
- 3 cups frozen mixed vegetables
- salt and pepper to taste
- 1 can coconut milk
METHOD
1. Heat oil in a large pot over medium heat. Saute onion and celery for 5-7 mins, until soft. Add potatoes and saute for 2 mins, stirring constantly.
2. Add water and deglaze the pan. Add soy creamer, a bit of salt, and bring to bubbling. Lower heat, cover, and simmer for 20 mins, or until potatoes are nice and soft.
3. Add vegetables, bring to bubbling, and cook for 5 mins. Add coconut milk and mix well. Using a hand blender, blend about half of the chowder to thicken. Or, transfer half of the soup to a blender and process. Make sure the soup does not boil after you have added the coconut milk (a little simmering is OK).
4. Season to taste with salt and pepper. Serve.
Posted by Vegan Dad at 8:51 PM

Email ThisBlogThis!Share to TwitterShare to FacebookShare to Pinterest
Labels: potato, soup
Newer Post Older Post Home
All images and recipes (unless otherwise noted) are property of Vegan Dad. Please do not re-post or otherwise duplicate without permission.