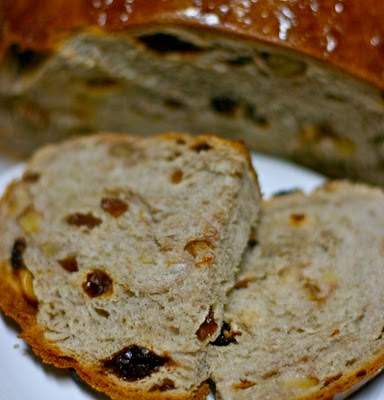 On to recipe two in The Bread Baker's Apprentice! As you can see by the self-explanatory title, artos is Greek celebration bread, and Reinhart provides the baker with three variations: a plain loaf, one for Christmas, and one for Easter. Since I didn't have any particular religious holiday to celebrate I make a more plain loaf but added in the fruit and nuts of the Christmas loaf thinking the end result would be something like a cinnamon raisin bread we could eat for breakfast. I also made the glaze but did not have any sesame seeds on hand as he suggests.

GENERAL NOTES:
1. This is one big loaf--somewhere between an American football and a rugby ball. Reinhart's instructions call for a boule, but I made more of a batard. Next time I would make an even longer batard (or even two loaves) since the final loaf was a tad unruly.
2. Unless I am making this for a holiday, I would skip the glaze next time since it was a real pain to bag up a sticky loaf of bread. I found I needed half as much as the recipe calls for, but I suppose if you made the variation with all the fancy decorations that would result in more surface area and the need for more glaze.
3. Possibly because of the vegan substitutes (below), I had to add in about 3/4 cup more flour than is called for. However, I usually find Reinhart's recipes heavy on the liquid (or light on flour) and I always end up using the minimum amount called for.
4. I used sourdough starter instead of the poolish, which meant I could make the bread in one evening.
5. I baked the loaf for the full 45 mins.

VEGAN NOTES:
1. I substituted maple syrup for the honey in the loaf and the glaze. It did not make anything taste maple-y.
2. I used 1/2 cup of soy yogurt for the 2 eggs.
3. I used full fat plain soy milk for the milk. 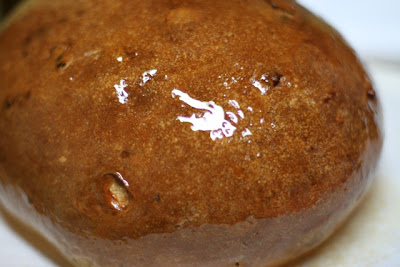