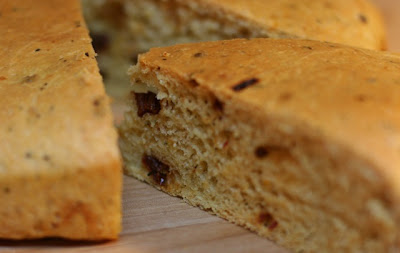 This is a version of brioche done Italian style, and the non-vegan version is supposed to be loaded with cheese and salami. For one insane moment I thought about replacing that with vegan cheese and meat, but quickly decided that the final product would probably be pretty gross. Instead, I went with sundried tomatoes for bursts of flavour, and some nutritional yeast for a more cheesy flavour. I also used Ener-G egg replacer this time, but felt that yogurt or silken tofu would have made for a moister loaf.

GENERAL NOTES
1. While I was intrigued with the idea of baking the loaf in a bag, I opted instead for 9" round pans. Reinhart calls for 8" round pans, but I don't have any. The final loaf was slightly thinner, but filled the pan just fine.
2. Because the thinner loaf, I baked the loaves for a total of 35 mins, instead of 40.

VEGAN NOTES
1. I replaced the milk with soy milk.
2. I replaced the eggs with 2 Ener-G eggs, but would opt for soy yogurt next time.
3. I replaced the butter with Earth Balance, and so I did not add any salt into the dough.
4. I replace the salami with 4oz sundried tomatoes in oil, drained, and chopped.
5. I added 1/3 cup of nutritional yeast to the dough.
Posted by Vegan Dad at 9:12 PM