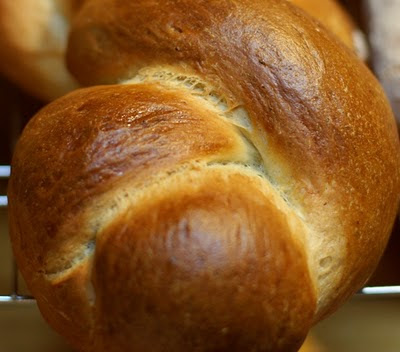 Several months ago a reader asked if I had a vegan challah recipe to share, and I fired off some vague reply about getting around to veganizing Reinhart's recipe. I really hope that person is still reading the blog because this turned out rather well, I think. Of course, I have never actually had challah before, so I have nothing to compare it to. You might be able to tell from the pic that I totally messed up the braiding. Turns out, its just like a regular braid but I thought Reinhart was teaching me some new braiding system. Lesson learned for next time.

GENERAL NOTES
1. I made one large braided loaf--it was a pretty big loaf.
2. I made the dough with 7 oz of water, but I would up it next time to make it a little more pliable.

VEGAN NOTES
1. I replaced the eggs with an equal weight of soy yogurt.
2. I replaced the egg yolks with 1 tbsp of ground flax whisked into enough water to make the 1.25 oz called for.
3. I used soy milk instead of an egg white wash.
Posted by Vegan Dad at 9:55 PM