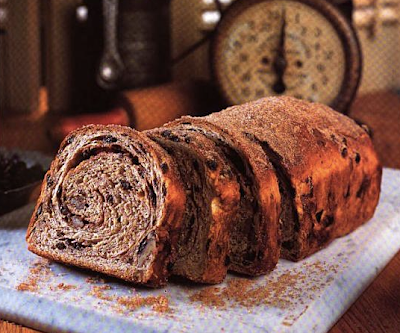 Entry two in the cinnamon section: a raisin walnut bread. For the life of me I can't find the pics I snapped of the bread, so I am including the one from the book found on Google Books. Sorry to say that the recipe is not also included (I guess this is what "limited preview" means). This is a pretty straight forward raisin bread (with super easy vegan subs), and the walnut adds a very nice touch. It was perfect warm from the oven, and still good the next day toasted for breakfast.

GENERAL NOTES
1. I need to get an 8.5 by 4.5 inch pan since Reinhart seems to favour smaller loaves for breads baked in pans. I was tempted to just make one mega loaf in a large pan, but decided against it.
2. I used half of the cinnamon mixture for the cinnamon swirl, and opted against dusting the loaves with cinnamon and sugar.

VEGAN NOTES
1. I used an equal weight of soy yogurt for the egg.
2. I used soy milk for the whole milk.
Posted by Vegan Dad at 9:18 PM