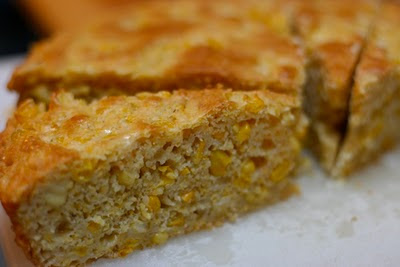 This is the best corn bread I have ever had. Not that I have had a lot of corn bread . . . but still. Instead of dry and crumbly, this corn bread is moist and fluffy and filled with tasty, tasty, corn (I love the flavour of baked corn). Baked in a cast iron skillet for a nice crispy crust, this bread is perfection. Note: the pages are out of order on the Google Books version. Just scroll up a few pages to see the rest of the recipe.

GENERAL NOTES
1. I did not soak the polenta overnight because I did not plan ahead. Instead, I warmed up the soy milk and let the polenta soak for about 2 hours.
2. I think I will reduce the baking powder to 1 tbsp next time--the final bread had a bit of a taste.
3. As mentioned above, I baked this in a cast iron skillet. I think it is smaller than 10 inches, so I ended up baking it for 45 mins.

VEGAN NOTES
1. No bacon.
2. I added 1 tsp of apple cider vinegar to the soy milk to make "buttermilk."
3. The 3 eggs were made from 1 flax egg (1 tbsp ground flax and 3 tbsp water, let soak, then whisk) and soy yogurt to make up the rest of the weight.
4. Maple syrup for honey (could use agave, I am sure)
5. Margarine subbed for butter.
6. I used 1 tbsp of canola oil to grease the pan instead of the bacon fat. 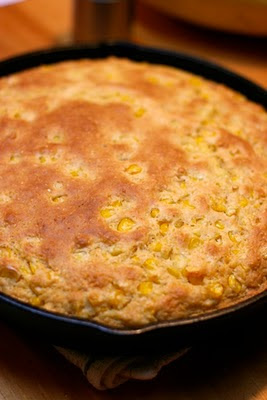