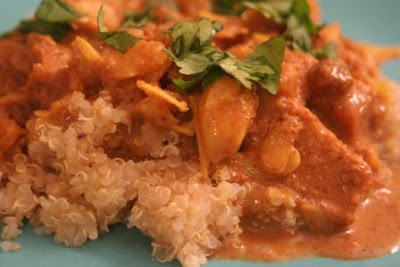 I used to make something like this with chicken back in the day. Today, as I stood in front of the open fridge looking at the last of the chicken seitan and a crisper full of apples (destined to be apple sauce in the near future), this recipe began forming in my mind. I decided to serve it over quinoa, just to boost the protein for those three growing boys tearing around the house. They all liked it (Son #3 had thirds) which is good since this recipe makes enough for plenty of leftovers.

Email ThisBlogThis!Share to TwitterShare to FacebookShare to Pinterest
Labels: apple, quinoa, seitan
Newer Post Older Post Home
All images and recipes (unless otherwise noted) are property of Vegan Dad. Please do not re-post or otherwise duplicate without permission.