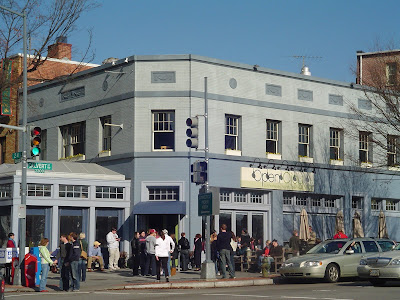 So many restaurants, so little time . . . . My final stop on my vegan tour through D.C. was Open City. It's not specifically vegan, and I didn't really want to go there per se, but members of the panel I was presenting on wanted breakfast before the session and this place was very close by. It was actually pretty good, taste wise, but a bit pricey. Here is why: I ordered the tofu scramble which only came with a tahini sauce and scallions. How blasé. It was 75 cents more for some tomatoes, and 1.00 more for baby spinach (I did not really realize this at time of ordering). The tofu was not actually scrambled, it was cubed, then stir fried with the veggies and cooked in a tahini sauce. The taste was good, and I was happy they offered tofu at all. I also ordered a Chai Tea which was spectacular except that they charged an extra 50 cents for soy milk. Gah! I hate when they do that! I don't think they should make soy seem like some luxury item or inconvenience. And, seriously, 50 cents more!!! Times like this make me want to tell the Dairy Board to go suck it.

My plan was to hit Java Green before I left the city. What I did not know is that downtown D.C. basically shuts down on Sunday. Java Green was closed. Undaunted, I trekked over to Washington Deli. Closed. I figured I would give Thai Kitchen a shot. Closed, too. It was a disappointing end to my vegan journeys.
Now, it's back home to cook for myself and Vegan Family. D.C. was fun, the food was great, and I was spoiled. Now, back to reality . . . .
Posted by Vegan Dad at 7:30 AM