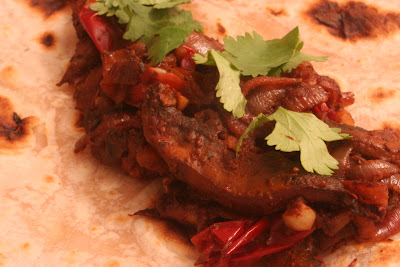 Tonight we just did not feel like leftovers (even though last night's curry was pretty tasty). The boys wanted something fun, so we did another breakfast for dinner. I wanted something a little more substantive than pancakes, and the mushrooms in the fridge weren't getting any younger. I had also bought sun dried red peppers on a recent trip to the bulk food store and thought I would put them into something. The result? These tacos. Tasty, but I wish I had made some tofu sour cream.

Email ThisBlogThis!Share to TwitterShare to FacebookShare to Pinterest
Labels: Mexican, mushrooms, peppers
Newer Post Older Post Home
All images and recipes (unless otherwise noted) are property of Vegan Dad. Please do not re-post or otherwise duplicate without permission.