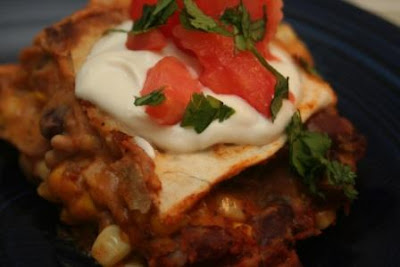 When I saw this recipe on Fearlessly Vegan today I knew I had to make it. In fact, I was so dedicated to making it that I glibly disregarded the fact that I did not have some of the ingredients. What's that they say about necessity being the mother of invention? First, I did not have canned chiles, so I had to leave them out (probably better for the kids, anyway). I did not have corn tortillas, so I made some wheat ones. I did not have enchilada sauce, so I made my own version. I did not have vegan cheese, so I made nacho sauce from The Ultimate Uncheese Cookbook. In the end it was all worth the extra work--the end result was so incredibly tasty. Thanks, Cali!

INGREDIENTS
- wheat tortillas (I custom made them to fit the casserole dish)
- 1 can kidney beans (or whatever beans you like)
- 1 can refried beans
- frozen corn
- nacho sauce
- enchilada sauce (recipe follows)
- vegan sour cream, chopped tomatoes, cilantro for garnish
METHOD
Preheat oven to 350 degrees
1. Put a thick layer of enchilada sauce on the bottom of a 2 qt casserole dish. Put down a single layer of tortilla. Spread on a layer of refried beans (1/3 of the can), and a layer of nacho sauce. Top with some corn, 1/3 of the beans, and more enchilada sauce.
2. Repeat again, and then again. Top with a final layer of tortilla. Brush with a thin layer of olive oil. Bake for 30 mins, or until top is golden brown and casserole is bubbling.
3. Serve topped with vegan sour cream, chopped tomatoes, and cilantro.
Enchilada Sauce
This is not really enchilada sauce--just something I whipped up with stuff I had in the pantry to give some tomato and chili flavour to the casserole.
- 1 14oz can tomato sauce
- 1 small onion, diced
- 2 garlic cloves
- 1 jalapeno pepper, seeded and diced
- 2 tbsp chili powder
- 1 tsp cumin
- 1/2 tsp oregano
- 1/2 tsp cinnamon
- 1 tsp salt
- freshly ground pepper
- 1 cup water
METHOD
1. Place all ingredients in a blender and process until smooth. Pour into a saucepan and cook for 10 mins over medium heat.
Posted by Vegan Dad at 8:29 PM

Email ThisBlogThis!Share to TwitterShare to FacebookShare to Pinterest
Labels: beans, Mexican
Newer Post Older Post Home
All images and recipes (unless otherwise noted) are property of Vegan Dad. Please do not re-post or otherwise duplicate without permission.