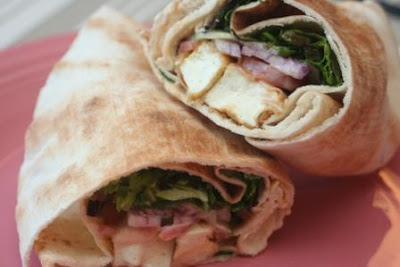 We took the boys to the Science Centre today for a final hurrah before March Break comes to an end. We always pack our lunch when we go there since vegan options are non-existent, and the food is expensive and generates a bunch of garbage. The most popular choice of the other families there today was Pizza Hut personal pizzas and Pepsi. As I sat there munching my Tofurkey wrap and banana I mused about the caloric and health differences between my meal and theirs. Well, according to the Pizza Hut website, one cheese only personal pizza has 680 calories, 28g of fat (12g of those saturated fat), 55mg of cholesterol, and 1350mg of sodium. Add a small Pepsi and you are at least 780 calories. In other words, if you are kid, you just had about all your allowed daily calories in one meal, with a huge dose of fat, sugar, and sodium.

Since we spent the day away, we needed a quick meal when we got home. This fit the bill.

METHOD
1. Heat a layer of oil in a frying pan over medium to med-hi heat. Whisk flour and broth powder together. Toss tofu cubes in flour mixture. Fry in batches in oil for about 5 mins, turning regularly to brown on all sides. Remove from oil and drain. (see pic below)
2. Cut pita halfway around the circumference, open up pocket, and fold down resulting flap. Fill pitas with fixins (whatever suits your fancy--above is what I used).
3. Tuck flap around filling then roll pita tightly. 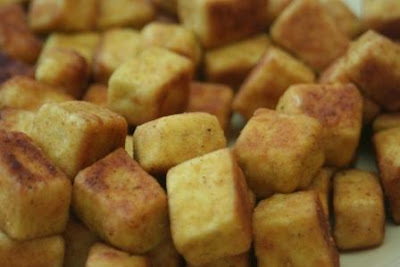 Email ThisBlogThis!Share to TwitterShare to FacebookShare to Pinterest
Labels: tofu
Newer Post Older Post Home
All images and recipes (unless otherwise noted) are property of Vegan Dad. Please do not re-post or otherwise duplicate without permission.