Pasta with Peppers and Spicy Sausage 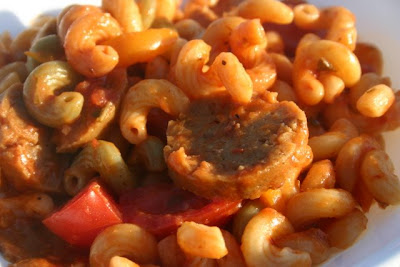 What better way to wow your omni family than with vegan sausage? While my brother-in-law was not fooled into thinking he was actually eating meat, he did say it was "good" and was "way up there" in relation to other fake meats he had tried. Hey, good enough for me! This recipe fed four adults and 6 kids (yes, it is crazy here), so you may want to make half a recipe.

INGREDIENTS
- 2 tbsp oil
- 1 onion, cut in half and sliced
- 1 red pepper, sliced
- 1 yellow pepper, sliced
- 1 orange pepper, sliced
- spicy vegan sausage, sliced
- 1 jar pasta sauce
- 10-12 large cherry tomatoes, quartered
- 700g (or so) pasta, cooked
METHOD
1. Get your pasta cooking in a large pot.
2. While pasta cooks, heat oil in a frying pan over med-hi heat. Saute onions and pepper for 5 mins. Then add sausage slices and cook for 5 mins more, until sausage browns a bit.
3. Drain cooked pasta and put back in pot. Stir in pasta sauce. Then toss on onion/pepper/sausage mixture and mix well. Finally, toss tomatoes in and serve at once.
Posted by Vegan Dad at 12:02 AM

Email ThisBlogThis!Share to TwitterShare to FacebookShare to Pinterest
Labels: fake meat, Italian, pasta, seitan
Newer Post Older Post Home
All images and recipes (unless otherwise noted) are property of Vegan Dad. Please do not re-post or otherwise duplicate without permission.