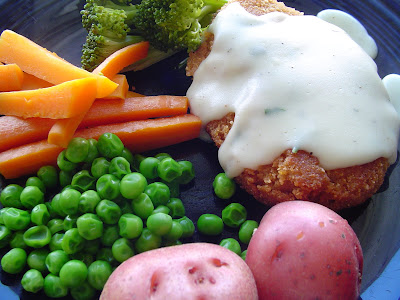 The last of the seitan went into tonight's southern-inspired meal. I had a similar dish in a restaurant in Philly and recreated it at home.
INGREDIENTS
- 1/2 cup canola oil
- 2 cups bread crumbs
- salt, pepper, nutritional yeast flakes (optional)
- 6 slices of seitan, or seitan cutlets
- 2 cups plain soymilk
- 1 tsp lemon juice
- 4 tbsp margarine
- 2 tbsp flour
- 2 cups soymilk
- 1 tsp lemon juice
- 1/2 tsp salt, white pepper
- 1 tsp dried rosemary, chopped
TIP! If you don't have breadcrumbs, process some cornflakes in the blender.
METHOD:
1. Heat oil in frying pan in med-hi.
2. Put bread crumbs in a medium bowl. Season with salt, pepper, and nutritional yeast flakes if desired.
3. Put soymilk in another medium bowl. Stir in lemon juice until soymilk thickens.
4. Dip seitan cutlet in soymilk mixture, then roll in breadcrumbs, then back in the soymilk, then coat again in crumbs.
5. Fry for 4-5 mins per side, until golden brown. Drain on paper towel.
1. Melt margarine on medium in a saucepan.
2. Whisk in flour, and continue to whisk until light brown.
3. Slowly whisk in soymilk and lemon juice. Bring to a slow boil, until mixture thickens.
4. Season to taste with salt and pepper. Add rosemary.
Spoon gravy over seitan cutlet and serve.
(I did not have any rosemary in the cupboard, so I used tarragon and parsely. Not as good, but passable.)
VERDICT:
Clean plates all around!
Posted by Vegan Dad at 8:10 PM

Email ThisBlogThis!Share to TwitterShare to FacebookShare to Pinterest
Labels: seitan, southern
Newer Post Older Post Home
All images and recipes (unless otherwise noted) are property of Vegan Dad. Please do not re-post or otherwise duplicate without permission.